Specialist independent vehicle service centre, Harborne Garage, has secured a contract with Birmingham City Council to support The Birmingham NOx Reduction Champions project. The team at Harborne Garage will be responsible for the conversion of 63 black cabs from diesel engines to LPG to help reduce NOx emissions in the city.

Being part of the Bosch Car Service network played a huge role in Harborne Garage being a suitable partner for the project, based on its levels of expertise, access to high quality training and equipment, as well as its central location in Birmingham.

After 18 months of working out the technicalities of such significant conversions, the garage was a key part of the team that developed the mechanical and software solutions to make the project feasible. The team includes individuals and companies with engineering, ECU, software and LPG expertise, with each playing a large part in the project’s success due to the very high level of skills required at every stage.

Following successful prototyping and testing work, the first five vehicles have now been booked in for conversion.

The Birmingham NOx Reduction Champions project has been backed by government funding as it seeks to improve the city’s air quality and introduce a Clean Air Zone. The ageing fleet of cabs is a key area where the level of NOx pollution can be addressed. By removing the diesel engines and replacing with a petrol equivalent, then adapting to run on LPG, NOx significant reductions of can be achieved.

Anne Shaw, Assistant Director – Transportation and Connectivity at Birmingham City Council, said: “Through the funding the council has successfully unlocked from the Government, we’ve been able to play a part in forming links with technology providers and engineers to come up with part of the solution to one of the city’s major public health issues.”

Harborne Garage worked through a number of options in order to make the conversions successful, and had initially developed a solution last year. However, following laboratory testing at Millbrook, a leading vehicle test and engineering service provider, it was established that the vehicles would be able to reach Euro 6 compliance with some tweaks to the process. Further testing at Millbrook’s state-of-the-art facilities, including over 18,000 miles of road testing, led to a new process that surpassed initial targets.

The results of the extensive testing mean that converted taxis meet Euro 6 requirements for emissions, which for the majority of the Hackney Carriage vehicles on the road equates to a minimum of over 90% reduction on NOX emissions. The solution developed by the team – including Harborne Garage and experts with engineering, software and LPG background – has gained full approval from all involved Government departments and is now live in Birmingham.

“We are all aware that the NOx pollution produced by many vehicles on our roads is not acceptable in the world we live in today. Eighteen months ago we set out to provide a solution for this and help clean up the air our children and grandchildren will be breathing,” said Steve Law, of Harborne Garage. “I’d also like to thank Sylvia Broadley at Birmingham City Council for her continued support and helping to make this a success. It is also worth pointing out that we would not have secured this project without being a Bosch Car Service garage. The training, expertise and visibility we benefit from as a member were crucial in us being selected as a technical partner.”

As a member of the Bosch Car Service network, Harborne Garage has access to the latest diagnostic equipment, enabling the team to closely monitor the vehicles as the conversion progresses, using Bosch parts including pumps and fuel injectors. With initial plans to convert three taxis a week, the garage will maintain its ability to service vehicles of all makes and models including light commercial vehicles.

Rhian Kendall, Bosch Car Service concept manager commented: “Bosch Car Service is proud that its members are able to support a cleaner future for our roads. Harborne Garage’s technicians regularly attend Bosch courses in order to stay up to date with the latest technologies, which has helped them deal with this project.”

The official launch of the conversion project was on Monday 25th April and was attended by Anne Shaw from Birmingham Council, as well as members of the Robert Bosch team. The drivers of the first taxis to be converted were also in attendance, with the second vehicle being completed on the day.

The Bosch Car Service national network of garages, comprising of around 500 members in the UK and Ireland, is a Bosch programme to provide motorists with a high quality and technically competent alternative to main dealer car servicing and repair, for all vehicle makes and models. All Bosch Car Service garages work to a Code of Practice approved by the Trading Standards Institute.

Customers interested in booking an appointment with Harborne Garage should contact the service team on 0121 472 4300, or visit www.boschcarservice.co.uk 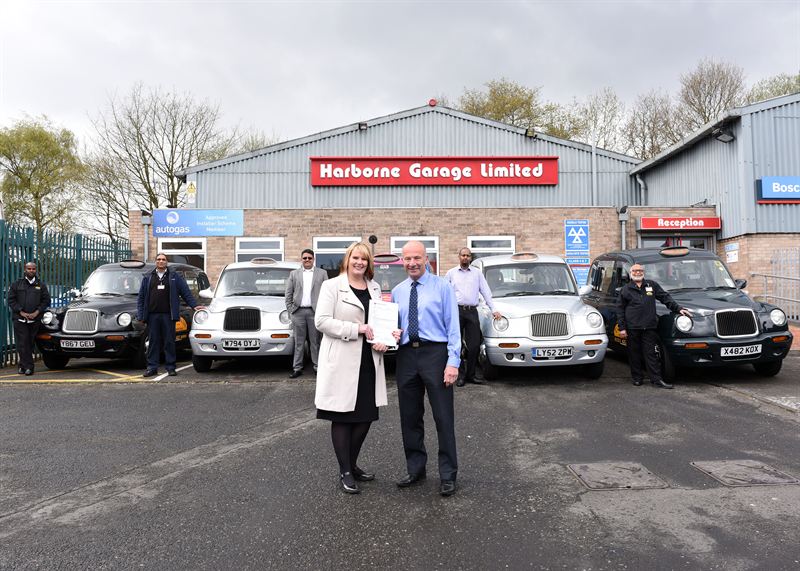 The Bosch Group is a leading global supplier of technology and services. Its roughly 360,000 associates worldwide (as per April 1, 2015) generated sales of 49 billion euros in 2014.* The company’s operations are divided into four business sectors: Mobility Solutions, Industrial Technology, Consumer Goods, and Energy and Building Technology. The Bosch Group comprises Robert Bosch GmbH and its roughly 440 subsidiary and regional companies in some 60 countries. Including its sales and service partners, Bosch is represented in roughly 150 countries. This worldwide development, manufacturing, and sales network is the foundation for further growth. In 2014, Bosch applied for some 4,600 patents worldwide. The Bosch Group’s strategic objective is to create solutions for a connected life. Bosch improves quality of life worldwide with products and services that are innovative and spark enthusiasm. In short, Bosch creates technology that is “Invented for life.”

*The sales figure disclosed for 2014 does not include the former joint ventures BSH Bosch und Siemens Hausgeräte GmbH (now BSH Hausgeräte GmbH) and ZF Lenksysteme GmbH (now Robert Bosch Automotive Steering GmbH), which have since been taken over completely.