Shanghai, P.R. China: This week marked the start of China’s Annual International Auto Show & Convention, Auto China. BYD, China’s largest independent auto manufacturer, impressed members of the media and industry alike by, for the first time, only displaying Electrified Vehicles for their entire line-up of 8 vehicles on the BYD Stand (5 dual-mode vehicles and 3 pure-electrics). Though not many were surprised that the green-tech giant was the first to make such a leap, as they have long been referred to as ‘China’s Electric Car Company’, the crowd was thrilled to see a Tier 1 auto company take this important step towards the future of zero-emission transportation solutions. 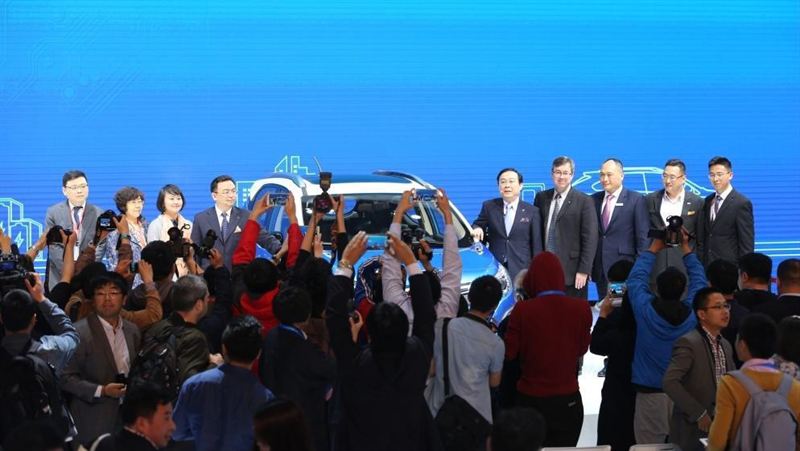 Pictured Above: BYD Executives and the BYD Yuan

Song is a compact SUV named after the Song Dynasty (in which China found its unity and prospered to be the wealthiest nation on earth at that time). Song is the second of BYD’s 5-4-2 Sports Utility offerings following last year’s Tang debut.

Yuan is a micro SUV named after the shortest, but most powerful Chinese dynasty – the Yuan Dynasty. Yuan is the third sports utility in BYD’s 5-4-2 lineup and will become the most powerful Micro SUV in the world, accelerating from 0-100 km/h in 4.9 seconds when it is launched later in 2015.

Pictured Above: The BYD 7+4 Strategy

As the world’s largest manufacturer of rechargeable batteries, their mission to create safer and more environmentally friendly battery technologies has lead to the development of the BYD Iron Phosphate (or "Fe") Battery. This fire-safe, completely recyclable and incredibly long-cycle technology has become the core of their clean energy platform that has expanded into automobiles, buses, trucks, utility vehicles and energy storage facilities. BYD and all of their shareholders, including the great American Investor Warren Buffett, see these environmentally and economically forward products as the way of the future.

BYD has made a strong entrance to the North, Central and South American markets with their battery electric buses, and lineup of automobiles. Their mission lies not just in sales growth, but also in sociological integration and local job creation as they have poured incredible investments into developing offices, dealerships and manufacturing facilities in the local communities they now call home, truly a first for Chinese companies. For more information, please visit www.byd.com or www.facebook.com/bydcompany.