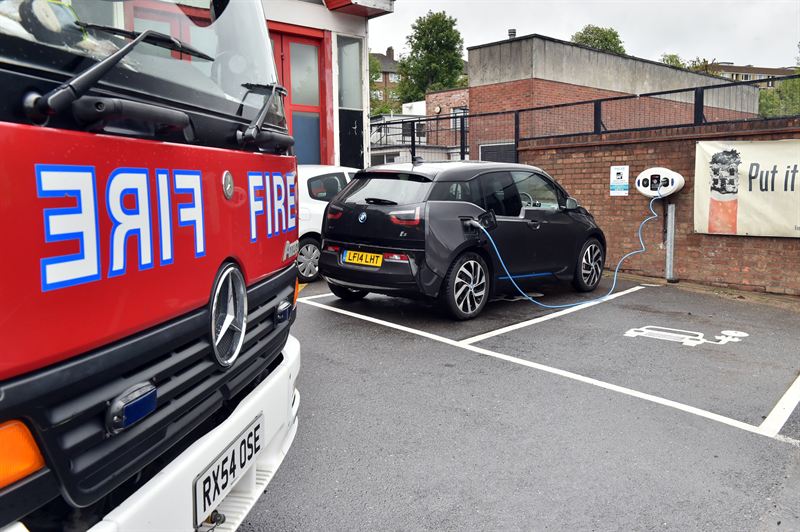 Chargemaster, the UK’s largest supplier of electric vehicle charging equipment, has completed the installation of 156 charging points at 71 fire stations and five other Brigade sites across London.

The charging points have been installed to support the London Fire Brigade’s growing fleet of electric support vehicles and 18 of the points in 9 locations are also available for public use.

As part of the Brigade’s commitment to reducing carbon emissions, the organisation selected Chargemaster’s popular twin socket fast charging units that can supply charge at a rate of up to 22kW.

Members of the public can use the charge points at Croydon, East Ham, Edmonton, Finchley, Hainault, Harold Hill, Hornsey, Ilford and New Malden fire stations, and can register for access and unlock the charging points on the spot via their smartphone.

The charging points are part of Chargemaster’s POLAR network, the largest in the country with over 4,000 publicly available charging points, which have a reliability and availability record of more than 99%*. Chargemaster has now supplied over 10,000 public and workplace units in the UK and over eight European countries.

Government funding contributed 75 per cent to the total cost of installing the charging points, while the remaining cost was covered by Chargemaster, which was appointed following a competitive tender to install and manage the charging point sockets.

Speaking about the co-funding deal between Chargemaster and the Department for Transport, Transport Minister Andrew Jones, commented: “I want cleaner, greener cars across the capital and this money will make a real difference. The Department for Transport’s funding for the 156 new charge points will make it easier for people to use these increasingly popular low emission vehicles. It is an example of Britain leading the way in developing sustainable transport options that are accessible to everyone.”

“We are pleased to have worked with London Fire Brigade and to have invested in partnership with Government to expand the charging network available to electric vehicle users in the city. All charge points were installed on schedule and are now part of the UK’s most reliable charging network. We are committed to increasing the uptake of electric motoring in the UK and to make it as convenient as possible for motorists.”

"I am delighted the Brigade’s electric vehicle charge points have been installed across London and are now ready for use by both Brigade staff and members of the public.

“Electric cars offer big environmental benefits and play an important part in keeping London clean. The new charging network not only makes it easy and convenient to charge up a car’s battery making electric cars easier to use, but also reaffirms London Fire Brigade’s commitment to lead on sustainability in the fire service and reducing our impact on the environment.”

The Brigade currently uses five electric cars through its lease car scheme and hopes to have a further five in its fleet towards the end of year, as a result of additional government funding secured from the Office for Low Emission Vehicles.

Chargemaster Plc is the UK’s leading provider of electric vehicle charging infrastructure. Benefitting from over 25 years of experience working within the telematics and vehicle-orientated industry, Chargemaster provides a comprehensive, flexible and practical range of electric vehicle charging solutions. Its charging stations are specially developed to accommodate new technological advances and the growing demands of the electric vehicle industry.  Chargemaster works in partnership with leading energy providers, vehicle manufacturers, government agencies, management consultancies and property development and blue chip companies. Chargemaster is the largest UK supplier of public and workplace charging units in the UK and has supplied over 10,000 charge points across Europe. The company operates its own manufacturing facility at Luton Airport which is currently producing over 2,000 charging units a month and operates to ISO9001 quality standards.