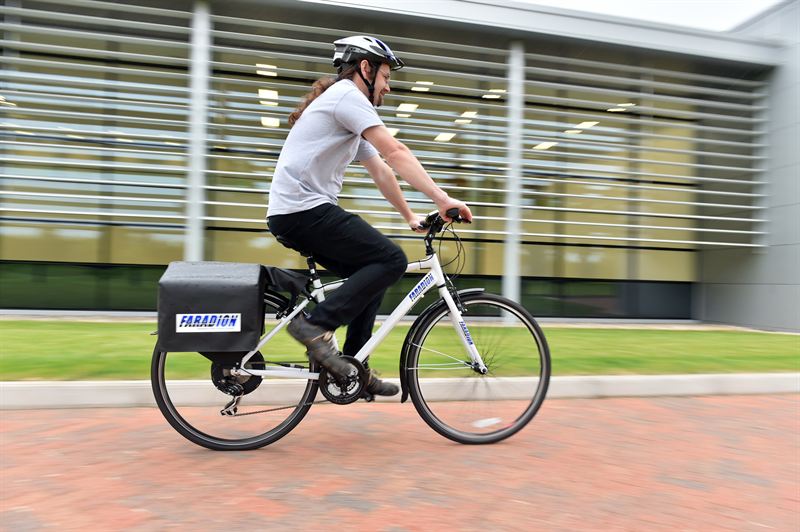 The world’s first sodium-ion powered vehicle has been successfully demonstrated by British battery R&D business Faradion, at the headquarters of Williams Advanced Engineering. The e-bike is a proof-of-concept, to show the capabilities of this new type of battery technology.

The demonstration is a major milestone for the technology that has been designed and developed in the UK. Although lithium-ion batteries are currently the predominant battery technology in electric and hybrid vehicles, as well as other energy storage applications, sodium-ion offers significant cost, safety and sustainability benefits.

The base materials required for sodium-ion batteries are more easily sourced than those needed for lithium-ion batteries, which are only found in a limited number of markets around the world.

The project to demonstrate Faradion’s sodium-ion battery technology has been part-funded by Innovate UK, the UK’s innovation agency in its latest competition for ‘disruptive technologies in low carbon vehicles’. It was led by Faradion and supported by Williams Advanced Engineering and the University of Oxford.

The battery for the e-bike has a design energy of 418 Wh, 250 Wh of which has been used in the e-bike proof-of-concept. Faradion’s sodium-ion cells deliver a specific energy of more than 140 Wh/kg.

The e-bike battery pack is made up of four modules, designed and manufactured by Williams Advanced Engineering, and controlled by its own battery management system. Each module contains 12 Faradion cells. The University of Oxford’s expertise has been used to maximise battery lifetime and initial test results indicate that, as well as comparable performance, sodium-ion cells offer comparable lifetimes to lithium-ion products.

As a proof-of-concept, the cells are larger than strictly necessary, which helped to avoid unnecessary costs and lengthy manufacturing processes at this early stage. When optimised, Faradion’s cells will be comparable in size to lithium-ion battery packs already on the market. As such, there is enormous potential to exploit the technology in a wide range of energy storage applications and electric and hybrid vehicles.

Faradion is pioneering the next generation of advanced, low-cost battery materials. These novel materials employ sodium-ion (Na-ion) technology which, when incorporated into batteries, will be virtually indistinguishable in terms of performance from the leading lithium-ion (Li-ion) products currently on the market.

Na-ion batteries have a number of benefits compared to battery technologies already on the market, with the foremost advantage being the low cost. The sodium salts used to prepare these battery materials are highly abundant, coming from more renewable sources than those of equivalent lithium salts, making them both cheap and easily obtainable. If compared to the equivalent salts used to make Li-ion batteries, the cost is approximately 1/10th.

Faradion was virtually the first investment made by Finance Yorkshire and is headquartered in Sheffield’s Innovation Centre. See more at: www.faradion.co.uk