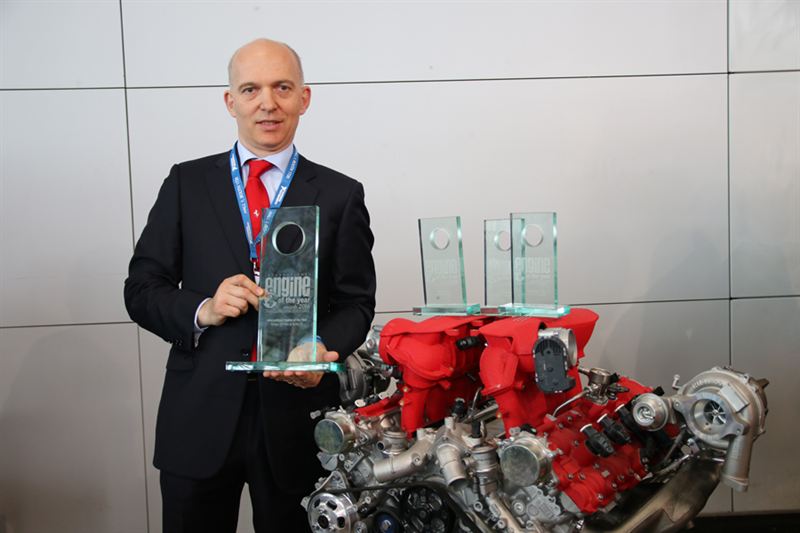 Vittorio Dini, Head of Powertrain at Ferrari, collects the International Engine of the Year Award for the 3.9-litre biturbo V8

Ferrari was awarded the crown at the ceremony today, Wednesday 1 June, at Engine Expo 2016 in Stuttgart. The awards are recognised as the industry’s top accolades for the world’s best powertrain technology, judged by a fully independent, international panel of 62 industry experts.

The 3.9-litre bi-turbo V8 took four gongs overall, including the New Engine award, designed to mark the most important engine development in the last 12 months, the 3-litre to 4-litre category and the Performance Engine award, which Ferrari has now claimed six years in a row. In what proved to be a memorable night for the Italian marque, its 6.3-litre V12, as found in the Ferrari F12tdf also clinched the title in the Above 4-litre category.

Ford again claimed the Sub 1-litre award for the 1.0 EcoBoost, bringing the engine’s total number of award wins to a phenomenal nine in five years. Tesla retained the Green Engine award for a third year with its full-electric powertrain found in the Model S and Model X, while Audi’s 2.5-litre five-cylinder turbo, found in the new RS3 and RS Q3, took the 2-litre to 2.5-litre title for a staggering seventh consecutive year.

Mercedes-AMG took the 1.8-litre to 2-litre award with the 2-litre turbo found in the A45, CLA45 and GLA45 models, in another repeat of last year’s results. And Porsche did not leave empty handed, clinching the 2.5-litre to 3-litre class for its new 3-litre six-cylinder turbo engine, found in the Porsche 911 Carrera.

Dean Slavnich, chairman of the International Engine of the Year Awards and editor-in-chief of a number of automotive titles, said, “It’s been another sublime year for powertrain development, with each category seeing an array of exceptional engines shortlisted. Huge congratulations to all the winners, especially to Ferrari for its phenomenal wins!”

For further information on the awards, please click here