Fewer of the world’s biggest exporters are actively investigating and punishing companies paying bribes abroad, according to a new report released today by Transparency International.

According to the report, the biggest global exporters with the worst track records are China, Japan, the Netherlands, South Korea, Hong Kong, Canada, India and Mexico.

In fact, most countries assessed (34 out of 47), conducted practically no enforcement of their foreign bribery laws.

“Money lost to foreign bribery wastes millions of dollars that could otherwise go to lifesaving services like health care,” said Delia Ferreira Rubio, Chair of Transparency International. “Too many governments choose to turn a blind eye when their companies use bribery to win business in foreign markets. G20 countries and other major economies have a responsibility to enforce the rules.”

China, the world’s largest exporter, failed to open a single investigation into foreign bribery between 2016 and 2019, despite Chinese companies appearing in multiple scandals and investigations by other countries.

Two other non-OECD major exporters – Hong Kong and India – did not open a single foreign bribery investigation from 2016 to 2019. Singapore opened only one investigation and concluded one case with sanctions during the past four years.

The US, UK, Switzerland and Israel are the only countries assessed that continue to actively enforce against foreign bribery.

Germany, which is the third largest exporter (with 7.6 per cent of global exports) pursued fewer investigations and closed fewer cases against graft overseas. Similarly, Italy, a top-10 exporter (2.6 per cent), also declined, as did Norway.

Conversely, France and Spain, which account for 3.5 per cent and two per cent of global exports respectively, improved their performance.

“Despite big corruption cases involving companies like Airbus, Odebrecht, and many others, our research shows that many countries are barely investigating foreign bribery,” said Gillian Dell, Senior Advisor at Transparency International and lead author of the report. “Unfortunately, it’s all too common for businesses in wealthy countries to export corruption to poorer countries, undermining institutions and development. And no country is immune.”

Transparency International calls on all countries that are signatories to the OECD Anti-Bribery Convention, as well as the other major global exporters to do more to enforce against foreign bribery, including:

For a full list of recommendations, read the report: https://www.transparency.org/en/exporting-corruption

Through chapters in more than 100 countries and an international secretariat in Berlin, Transparency International has been leading the fight against corruption for the last 27 years.

Since 2005, the Exporting Corruption series by Transparency International places countries into four categories of foreign bribery enforcement according to the number of investigations and cases the authorities open and conclude with sanctions over a four-year period. Different weights are assigned according to the stages of enforcement and the significance of cases. Countries’ share of world exports also factors into their placement. 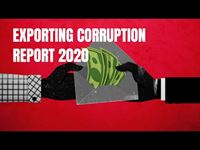