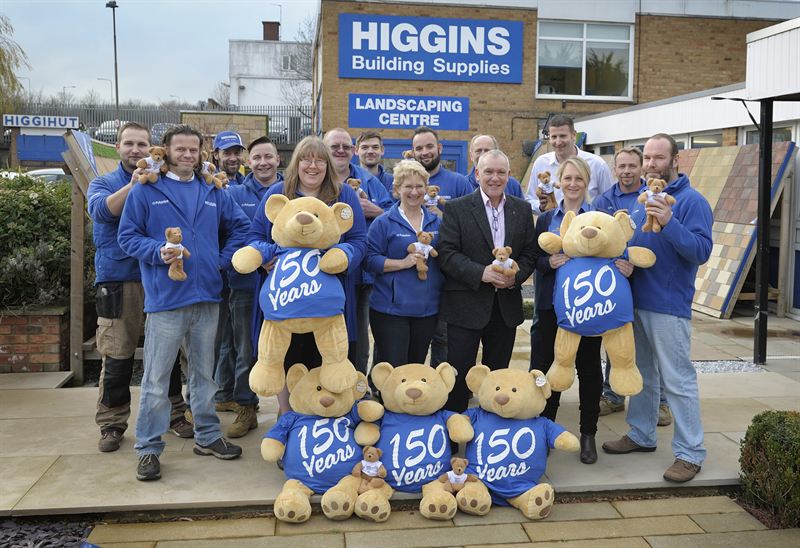 The family owned builders’ merchant - which serves trade and DIY customers across Northamptonshire, Bedfordshire and Cambridgeshire - is commemorating 150 years of trading. The anniversary makes Higgins one of the oldest independent builders’ merchants in the UK today.

First based on Midland Road, Wellingborough, the company was established in 1866 by Thomas Henry Higgins. Originally a stonemason, Thomas soon diversified in order to meet the needs of local customers who wanted their stonework and other building materials supplied at the same time.

Over the next century and a half, the business has continued to grow and evolve under the carefully direction and stewardship of five successive generations of the Higgins family.

Key highlights from the company's history include the opening of a second depot in Kettering in 1902. This location was chosen as it was a day and half’s horse and cart drive from Wellingborough ensuring an efficient delivery service.

Higgins bought its current 4.5 acre Turnells Mill Lane site in Wellingborough in 2003 before constructing a number of buildings and officially opening the depot for business in January 2004.

The company’s current second site, on Station Road in Irthingborough, was acquired in 2012. After extensive renovations to the existing on-site buildings, this depot opened in 2013 enabling Higgins to serve customers across a broader geographical area.

To mark its 150th anniversary, Higgins Building Supplies has a number of events, promotions and initiatives planned for 2016. This will include opening a new counter at the Wellingborough site and running prize draws with the chance to win prizes including a brand new van. The business will also stage an exclusive 150th anniversary trade day for customers in September.

“We owe our longstanding success to a combination of factors. This includes a belief in offering a wide range of high quality, competitively priced products backed by the highest levels of service and friendly, expert advice.

“We also couldn’t have achieved such an impressive milestone without the support of the local building trade. We’d like to thank our past, present and future customers for their loyal business.”

Caption: Major milestone. The Higgins team, complete with Higgi Bears, are preparing to celebrate a century and a half of supplying the building trade.

- Higgins Building Supplies is a family owned builders’ merchant serving trade and DIY customers from across Northamptonshire, Bedfordshire and Cambridgeshire.

- Formed in 1866, Higgins Building Supplies celebrates its 150th anniversary in 2016 making it one of the oldest independent builders’ merchants in the UK today.

- Higgins Building Supplies currently employs 47 people across two depots; one in Wellingborough (which is also home to company’s head offices) and a second in Irthingborough.

- Though an extensive product range and service initiatives that include expert advice, an estimating service and same day/next day delivery, Higgins can support customers with projects ranging from major developments and ground works to self-build, extensions and landscaping.

- For more information on Higgins Building Supplies, visit www.higgins.uk.com or like the company on Facebook at www.facebook.com/HigginsBuildingSupplies