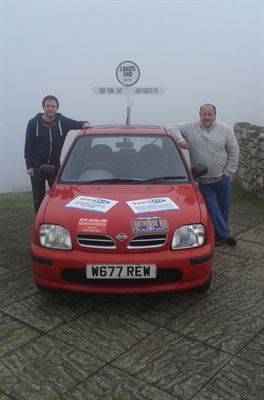 Manufacturer of sealants, adhesives, tiling product, waterproofing compounds and other building chemicals, Bond It has lent its support to a builder raising funds for the Lighthouse Club.

The business sponsored Will Linday as he undertook a mammoth, 1000 mile, Land's End to John O'Groats car run in aid of the building industry charity.

Founded in 1956, the Lighthouse Club provides welfare assistance and support to construction industry workers and their families during times of injury or ill health. Since the charity's formation, it has delivered financial aid to the value of £11 million.

A self-employed builder for 35 years and now enjoying the benefits of semi-retirement, Will has been a Lighthouse Club member and supporter for two decades.

This is the third time he has completed the Lighthouse Club's Land's End to John O'Groats Run in aid of the charity.

The event is about careful planning and good navigational skills as opposed to speed. Entrants must make their way from one end of the UK to the other via a series of checkpoints and without the help of devices like sat-navs.

Will undertook the run in a Nissan Micra which is at the end of it useable life and that was originally destined for scrapping and recycling.

Speaking of his involvement and of Bond It's support, Will said: "The Lighthouse Club Run is a great way to help the Club raise both funds and the profile of its valuable work in support of the construction industry. It’s also immense fun. I'd like to thank my son for acting as co-driver and Bond It for the company's generous support. I’m already looking forward to the 2016 event."

David Moore, managing director at Bond It, added: "As a manufacturer whose products are used across the construction industry, the work of the Lighthouse Club is close to our own hearts. We are delighted at being able to support that through our sponsorship of Will."

Image: Bond It Will Linday.jpg

Caption: Driven to help. Bond It sponsored builder Will Linday and his son in a car run to raise funds for the Lighthouse Club