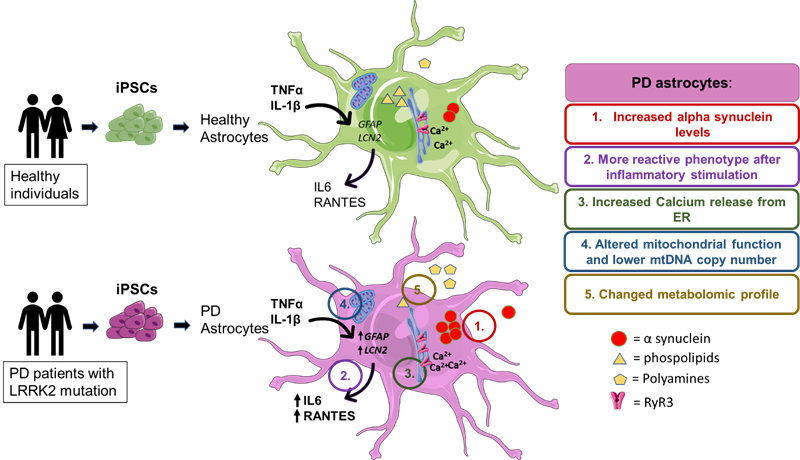 A new study using induced pluripotent stem cell (iPSC) technology links astrocyte dysfunction to Parkinson’s disease (PD) pathology. The study carried out at the University of Eastern Finland and published in Scientific Reports highlights the role of brain astrocyte cells in PD pathology and the potential of iPSC-derived cells in disease modelling and drug discovery.

PD affects more than 6 million people worldwide, making PD the second most common neurodegenerative disease. PD's exact cause is still unknown, but several molecular mechanisms have been identified in PD pathology. These include neuroinflammation, mitochondrial dysfunction, dysfunctional protein degradation and alpha-synuclein (α-synuclein) pathology. The disease’s major hallmarks comprise the loss of dopaminergic neurons and the presence of Lewy bodies and Lewy neurites. The loss of dopaminergic neurons and the subsequent decrease in dopamine levels are considered responsible for PD’s typical movement symptoms. There is no cure for PD and currently, the treatments are targeted to alleviate the motor symptoms with dopamine replacement therapy and surgery.

The greatest risk factor for PD is high age, but some environmental factors, such as toxins and pesticides, have been shown to increase PD risk. Though most PD cases are late-onset and sporadic with no evidence for an inheritance, approximately 3-5 % are monogenic. The most common cause for monogenic PD is mutations in the leucine-rich repeat kinase 2 (LRRK2) gene. LRRK2-associated PD is clinically closest to sporadic forms of the disease regarding the age of onset, disease progression and motor symptoms. Additionally, mutations in the GBA (glucosylceramidase beta) gene are the most significant risk factor for PD identified to date. The molecular mechanisms by which GBA mutations result in this increased risk are currently the focus of substantial research efforts.

While studies focusing on dopaminergic neurons have brought new insight into PD pathology, astrocyte contribution to PD has been investigated only sparsely. Astrocytes are glial cells and the most abundant cell type in the human brain. It was long thought that the astrocytes worked solely as supporting cells for neurons, but today the role of astrocytes is known to be far more extensive. Until now, only a few studies have used iPSC-derived astrocytes obtained from PD patients. The current study used iPSC-derived astrocytes from two PD patients carrying a mutation in the LRRK2 gene, one of them presenting with an additional mutation in GBA to further characterize the PD astrocyte phenotype.

The researchers found out that astrocytes from PD patients produced significantly higher levels of α-synuclein, a protein that accumulates in PD patients’ brain. One of the key pathological features caused by α-synuclein aggregation is the disruption of calcium homeostasis, and the study showed increased calcium levels in PD astrocytes. As inflammation is considered to be an important contributor to PD pathology, the response to inflammatory stimuli was studied in astrocytes. The PD patient astrocytes were highly responsive to inflammatory stimuli and more sensitive to inflammatory reactivation than control astrocytes. Additionally, PD astrocytes showed altered mitochondrial function and lower mitochondrial DNA copy number. Furthermore, PD astrocytes showed increased levels of polyamines and polyamine precursors while lysophosphatidylethanolamine levels were decreased, both of these have been reported altered in PD brain.

“The results provide evidence that LRRK2 and GBA mutant astrocytes are likely to contribute to PD progression and offer new perspectives for understanding the roles of astrocytes in the pathogenesis of PD,” says Early Stage Researcher Tuuli-Maria Sonninen, the lead author of the study.

This study was conducted at the University of Eastern Finland, A.I. Virtanen Institute for Molecular Sciences, in Professor Jari Koistinaho’s research group under the supervision of Docent Šárka Lehtonen. The study was supported by the Finnish Parkinson Foundation, the Olav Thon Foundation, the Sigrid Juselius Foundation and the Joint Programme for Neurodegenerative Disease (JPND) research co-funded by the EU Research and Innovation programme Horizon 2020 through the ERA-NET co-fund scheme.