Edible grasshoppers can be modified for better fatty acid composition 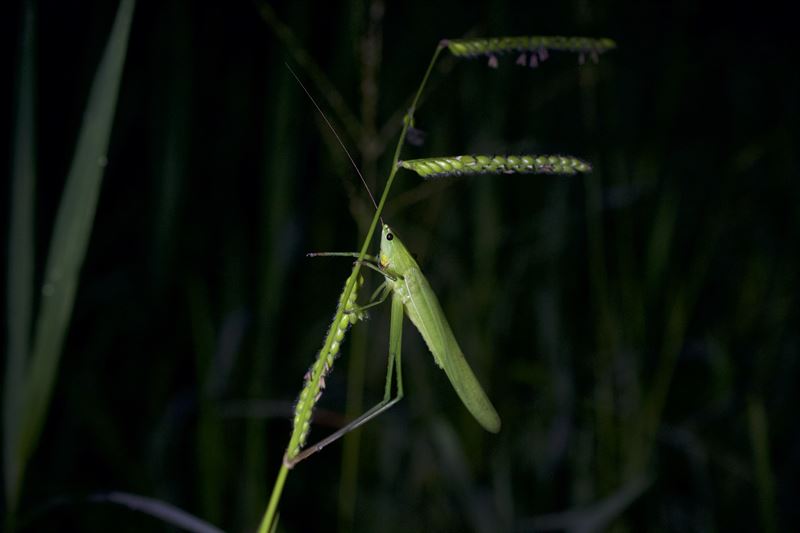 It is possible to modify the fatty acid composition of edible grasshoppers by adding essential fatty acids in their feed, new research from the University of Eastern Finland shows. The study focused on the long-horned grasshopper Ruspolia differens, an economically and nutritionally important insect species that is common and widespread in Africa.

More than 2,000 insect species are known to be eaten by humans. Edible insects are one potential solution to global food security problems, since their production requires less space and water and has lower greenhouse emissions than the production of meat. However, for edible insects to realise their true potential as a source of food and feed, effective mass rearing methods for different species are needed.

“There are huge differences between different species: what works for one species, doesn’t necessarily work for another. In our most recent study, for example, we explored what kind of egg-laying media would be suitable for mass rearing of Ruspolia differens,” researcher Vilma Lehtovaara, MSc, from the University of Eastern Finland says.

“Our research has focused on the use of Ruspolia differens in Uganda, Africa. There, insects are vital for food security especially in rural areas. They often supplement people’s diets and are consumed as snacks,” Lehtovaara explains.

Insects are collected by harvesting wild populations during swarming seasons. However, Ruspolia differens swarms only twice a year and the yields are highly unpredictable. In many places in East Africa, overexploitation is a cause of concern, as harvesting has intensified and grasslands are diminishing due to changes in land use.

“Mass rearing is a way to help preserve wild populations in the long term. We studied how the species lives out in the wild and how these conditions could be mimicked in a lab. We also wanted to see what they eat in the wild, and whether they would accept also other foods,” Lehtovaara says.

The researchers discovered that by adding essential fatty acids in the feed given to Ruspolia differens, it is possible to modify their fatty acid composition, making them even healthier for human consumption.

The researchers found that in some Ruspolia differens, up to 60% of their weight was fat, while insects typically contain only 10–30% fat. The fatty acid profile of lab-reared insects can be very different from those living in the wild.

“We were able to modify the fatty acid composition of Ruspolia differens by making modifications to their feed at the end of their life-span. In other words, it is possible to use regular feed in the early stages of their development and to boost this feed with fatty acids later in their life, making their fatty acid composition optimal for human consumption. This is actually similar to what is being done with reared salmon. The same works in insects, but is much more efficient,” Lehtovaara concludes.

Lehtovaara presented the findings in her doctoral dissertation focusing on Ruspolia differens. The doctoral dissertation, entitled Mass production of the edible long-horned grasshopper Ruspolia differens (Orthoptera:Tettigoniidae): Investigation of the basic parameters of rearing, is available for download at: http://epublications.uef.fi/pub/urn_isbn_978-952-61-3177-1/urn_isbn_978-952-61-3177-1.pdf.

The doctoral dissertation was completed as part of the Developing mass rearing technology for the highly valued edible grasshopper,  Ruspolia differens project. Funded by the Academy of Finland, the project was led by Professor Heikki Roininen at the University of Eastern Finland and it involved collaboration with Makerere University in Uganda.