First Student Built Rocket Car Goes Off with a ‘Bang’

Students at the University of Hertfordshire got to see their latest project fire off at top-speed, as Dallas Campbell, presenter of BBC’s ‘Bang Goes the Theory’, took their rocket-powered car off for a high-powered test-drive for an up-coming episode of the science-based show.

Built in less than six weeks, the car is the first rocket-powered vehicle to be built by final-year aerospace students as part of their studies. Modified from a Vauxhall VX220 sports car, it has been fitted with a rocket motor with a thrust of around 600kg, meaning it will reach 0-60 miles per hour in three seconds – faster than a Ferrari.

“It was a real honour to have Dallas Campbell film with our car. Hopefully it will encourage more young people to study and consider careers in Science, Technology, Engineering and Maths.”

Filmed at Duxford, Dallas Campbell tested the car as part of a feature on the Bloodhound 1000 miles per hour car, currently being built for an attempt on the land-speed record. Footage of the University of Hertfordshire’s rocket car will be broadcast as part of the current series of ‘Bang Goes the Theory’, due to be aired on Monday 30 April 2012.

For video footage of the day and the build of the car or for more information about rocketry at the University of Hertfordshire, visit www.rockets.herts.ac.uk. 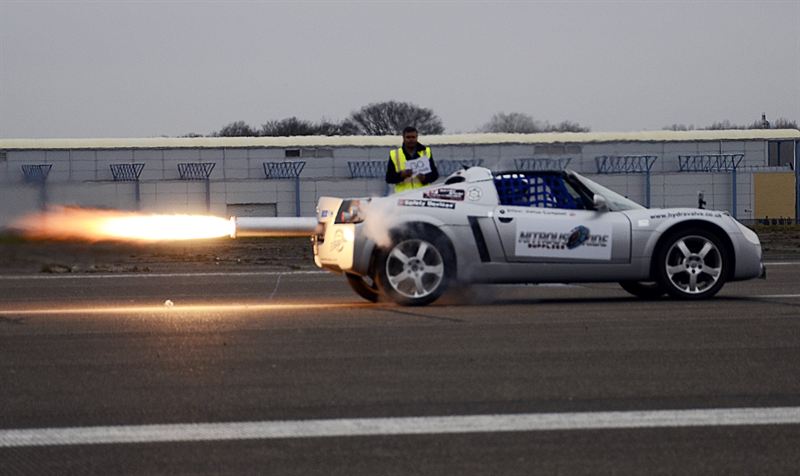 Picture caption: Rahul Kundu, one of the students who designed the rocket motor, holds the ‘Go’ board

The University is the UK’s leading business-facing university and an exemplar in the sector.  It is innovative and enterprising and challenges individuals and organisations to excel.  The University of Hertfordshire is one of the region’s largest employers with over 2,300 staff and a turnover of almost £231 million.

With a student community of over 27,700 including more than 2,900 international students from over eighty-five different countries, the University has a global network of over 170,000 alumni.

The University of Hertfordshire was awarded ‘Entrepreneurial University of the Year 2010’ by the Times Higher Education (THE) and ranks in the top 4% of all universities in the world according to the recent THE, World University Rankings. For more information, please visit www.herts.ac.uk

Did you know there is a University of Hertfordshire graduate in every British Formula 1 team. - We set the pace