Neville will be joined by Ellis Marsalis for “A Night with New Orleans Music Legends,” starting at 7:30 p.m. Tuesday, April 2, at College Park Center, 601 Spaniolo Drive.

General admission tickets are free but required. A premium-seating package is available for $25 and includes reserved seating, parking and more. Tickets will be available starting at 10 a.m. Friday, March 1, at www.utatickets.com.

Neville has been making music for five decades and released his latest project, My True Story, earlier this month. The selections range from pop to R&B and soul, and he collaborated with music giants such as the Drifters (“Under the Boardwalk”), and the Imperials (“Tears on My Pillow”).

“I attended the university of doo-wop-ology,” Neville explains on his website. “Anything I do has got some doo-wop in it. It’s just part of me — it’s the texture that I’m singing in, it’s the endings, it’s the harmonies.”

My True Story represents the culmination of Neville’s career, which has seen him move seamlessly back and forth between solo work and his role in the first family of New Orleans music, the Neville Brothers.

His first hit single was the landmark “Tell It Like It Is,” which held the top spot on the R&B charts for five weeks in 1967. He went on to win Grammy Awards for his triple-platinum 1989 collaboration with Linda Ronstadt on “Cry Like a Rainstorm, Howl Like the Wind,” and reached the Country charts with the title track of 1993’s “The Grand Tour.” A member of the Louisiana Music Hall of Fame, his last project was the gospel album I Know I’ve Been Changed in 2010.

Marsalis, a member of the Louisiana Music Hall of Fame, is one of the most respected pianists in jazz. In 2011, he was honored with the opening of the Ellis Marsalis Center for Music in Musicians’ Village in New Orleans. Each of his four sons is a jazz musician, including music legends Branford and Wynton Marsalis.

The April 2 event will close out the fifth season of the Maverick Speakers Series.

The University of Texas at Arlington is a comprehensive research institution of more than 33,200 students and more than 2,200 faculty members in the heart of North Texas. Visit www.uta.edu to learn more. 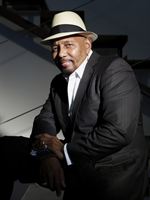