The Planetarium at UT Arlington is making changes that will allow schoolchildren and other planetarium patrons an even better picture of our galaxy and beyond, including the opportunity to experience 3-D features.

A new Digistar 5 projection system will be installed this month and will be used for shows beginning in 2013. The planetarium, which is part of the UT Arlington College of Science, is the only North Texas facility with the new software.

“With these new features, we will be able to act as if we’re riding in an alien spacecraft visiting other vistas of the universe, such as extra-solar planets orbiting distant stars,” said Levent Gurdemir, the planetarium’s director. “The new software also will allow us to virtually fly from one location to another on Earth because they’ve integrated Google’s terrain map data. So, we can visit volcanoes, fault lines or even take a tourist trip to New York City.”

The Planetarium at UT Arlington features a 60-foot diameter dome. It has increased in popularity as an educational and entertainment venue each year since its 2006 opening. It drew 56,000 visitors during the 2011-2012 academic year, more than half of which was from area schools and other youth groups.

According to computer graphics innovator Evans & Sutherland, the maker of the Digistar 5 system, the new software “contains the most comprehensive set of astronomical data ever assembled, including the fully integrated Digital Universe data set from the American Museum of Natural History and NASA.”

“The Planetarium has been a great community outreach tool for the University, and we expect this upgrade to make it an even more valuable asset,” said Pamela Jansma, dean of the College of Science.

Current public shows appeal to a variety of ages, from the children’s astronomy primer “Secret of the Cardboard Rocket” to the amusement park ride thriller “Spacepark 360” to the beautiful “Experience the Aurora.” Holiday shows, including “Holiday Music Magic” and “Season of Light,” start Dec. 6. For more information, visit www.uta.edu/planetarium/.

On Dec. 21, the venue will host a Not The End of the World Party from 7 p.m. to midnight, featuring lectures, arts and crafts and planetarium shows.

The University of Texas at Arlington is a comprehensive research institution of more than 33,200 students and more than 2,200 faculty members in the heart of North Texas. Visit www.uta.edu to learn more. 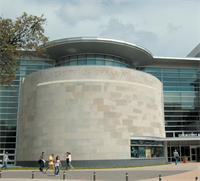