A professor emeritus in biology from The University of Texas at Arlington who is an esteemed expert in freshwater and marine invertebrates is expanding his research into the spread of invasive zebra mussels into Texas lakes.

Zebra mussels’ invasion of North American water bodies has resulted in the loss of billions of dollars in ecological services, human recreation, and in mitigation and control of mussel fouling in potable water, power station and industrial raw water facilities.

“A female zebra mussel can produce up to a million externally fertilized eggs within a single spawning season that develop into planktonic larvae,” said Robert MacMahon, professor emeritus of biology and principal investigator on the new grant from the Texas Parks and Wildlife Department.

“The larvae are dispersed on water currents to settle throughout an invaded water body. Once settled, zebra mussels reach maturity within one year of life. Thus, they can rapidly develop very high densities after invasion disrupting aquatic ecosystems. In addition, they settle in and foul industrial raw water facilities,” he added.

Zebra mussels (Dreissena polymorpha) are small bivalve mollusks. Most are about the size of a human fingernail, but they can grow to a length of nearly 2 inches. They were introduced to North America from Europe via transatlantic shipping, first appearing in the Great Lakes in 1988. From there they made their way to the Mississippi, Hudson, St. Lawrence, Ohio, Missouri, Huron, Colorado, Canadian and Arkansas Rivers, invading the major drainages of the Mississippi and other rivers in all but the far northwestern United States. Major mussel infestations now occur in Texas water bodies on the drainages of the Red, Trinity and Brazos Rivers.

Zebra mussels attach themselves to rocks and other hard surfaces, or to the shells of other mussels, by byssal threads, which are silky fibers made from proteins. This allows them to form encrustations which can be several shells thick and can lead to densities of 100,000 individuals per meter squared, which are not uncommon in infested waters, McMahon said.

The researchers will use monthly samples from infested Texas lakes to estimate mussel spring and fall cohort growth rates and life spans, juvenile settlement rates, periods when mussel planktonic larvae are capable of settlement, impact of water temperature on annual variation in mussel nutritional condition, and chlorophyll a and total phosphate concentrations in the water column as a measure of overall lake productivity.

“Our study has a special emphasis on understanding the causes of the zebra mussel population collapses that have occurred in Texas lakes and other warm, southwestern water bodies,” McMahon said.

In three Texas lakes – Texoma, Ray Roberts and Belton – a rapid increase in the number of zebra mussels has been followed by a sharp decline. The mussels can starve themselves out by removing plankton, phosphates and nitrates from the water, and flooding may also lead to a decrease in their numbers. Some Texas lakes with low calcium concentrations, particularly in East Texas, are resistant to zebra mussel invasion because mussels require relatively high calcium concentrations in order to thrive. McMahon said constant monitoring of infested lakes is needed, and added it may be years before the full impact of the mussels on lakes’ water quality and biodiversity is known.

Van Zee met McMahon in 2009 when zebra mussels were first found in Texas and says McMahon’s expertise has been highly beneficial as state authorities try to find the best way to handle the mussels’ invasion of Texas.

“Dr. McMahon has been a great asset to the Texas Parks & Wildlife Department with his knowledge and experience,” Van Zee said. “He’s a phenomenal resource for us in dealing with this problem.”

The Texas Parks and Wildlife Department has been making a concerted effort over the last several years to educate recreational boaters about zebra mussels and how not to be vector for their introduction to other uninfested Texas water bodies, McMahon said. The campaign (http://texasinvasives.org/zebramussels) involves educating boaters to “Clean, Drain and Dry” their watercraft to make sure that they are not moving zebra mussels and their larvae or other invasive aquatic organisms between water bodies.

“It is now the law in Texas that boaters must drain all water from their boats on leaving any water body so they do not carry zebra mussel larvae to any other water body,” McMahon said. “As boaters and marina operators become better informed about the dangers associated with unintentional overland transport of zebra mussels and other aquatic invasive plants and animals, it is expected that the number of newly infested Texas lakes will decline through time, and eventually new introductions will cease.”

Clay Clark, department chair and professor of biology, said that McMahon’s ongoing work in studying zebra mussels serves an important role in keeping the public informed about a serious threat to water quality and aquatic life in Texas lakes, and also demonstrates the University’s commitment to Global Environmental Impact, one of the main tenets of the University’s Strategic Plan 2020: Bold Solutions | Global Impact.

“Dr. McMahon has been studying the biology and control of invasive aquatic invertebrates such as zebra mussels for many years and his wealth of knowledge will serve the Texas Parks & Wildlife Department very well in this project,” Clark said. “There’s no one better suited to do this research.”

McMahon received his Ph.D. in Zoology from Syracuse University in 1972 and began his career at UTA the same year. He has served as associate dean for the College of Science as well as dean of the University’s Honors College. He was named professor emeritus in biology in 2010. He received the UTA Award for Distinguished Record of Research in 1990 and in 2015 was presented a Lifetime Achievement Award from the National Invasive Species Council.

The University of Texas at Arlington is a Carnegie Research-1 “highest research activity” institution of about 55,000 students in campus-based and online degree programs and is the second-largest institution in The University of Texas System. U.S. News & World Report ranks UTA fifth in the nation for undergraduate diversity. The University is a Hispanic-Serving Institution and is ranked as the top four-year college in Texas for veterans on Military Times’ 2016 Best for Vets list. Visit www.uta.edu to learn more, and find UTA rankings and recognition at www.uta.edu/uta/about/rankings.php. 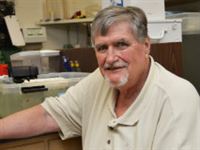