Physicists at The University of Texas at Arlington are leading a $7.3 million national initiative to develop a next generation space weather simulator capable of predicting energy distributions during space weather events like solar flares to an accuracy of one degree longitude and one degree latitude – about 100 km in each direction.

Current estimates of the energy entering the upper atmosphere during times of greatest solar output can be off by as much as 100 percent. As a result, the models used to forecast trajectories and track satellites orbiting in a specific region can also yield an error of up to 30 percent, affecting the stability of GPS and communication systems.

“This is a golden opportunity to help improve our ability to predict space weather effects with much higher accuracy and detail,” said Yue Deng, an associate professor of physics and project leader. “We are bringing together physicists from seven leading research universities to create a global simulation model that combines our joint knowledge and experience to solve this important problem.”

“To boost space weather modeling we have to go to a smaller scale, spatially and temporarily, which will require new physics as well as combining our current knowledge and models” said Deng. “We will also have to take into account many new phenomena and processes to make this new global simulator effective.”

“With this new project, UTA is accelerating its research profile and leading a first-class team of the U.S.’s best space physicists to solve an important problem,” Dimos said. “This work will be an important pillar of our focus on data-driven discovery within the Strategic Plan 2020: Bold Solutions | Global Impact.”

“UTA is leading a strategic national project that is key to the stability of our communications systems and our national security,” Congressman Veasey said. “The Department of Defense’s selection clearly demonstrates that research at UTA has reached the very highest level and positions the university among the nation’s leaders in this field.”

The project involves several phases of data analysis and assimilation, followed by model development and validation. In the first phase, measurements of electric and magnetic fields from low-flying spacecraft and ground-based remote sensing tools will be processed to define the intensity and distribution of energy in the upper atmosphere during both quiet and storm periods. According to the project, this data will then be compared with simulations from Yue Deng’s current Global Ionosphere-Thermosphere Model or GITM, which uses advanced computing to model energy redistributions in the upper atmosphere.

This research builds on Deng’s 2015 Air Force Office of Scientific Research grant of $378,350 to study space weather effects over the polar regions and two prior NASA grants totaling almost $1,000,000 that she won in 2013 and 2014 to study how energy from solar winds enters and moves around the upper atmosphere and how events affect vertical winds in the upper atmosphere. All three investigations are currently ongoing.

Deng began to develop the Global Ionosphere-Thermosphere Model while she was a graduate student at the University of Michigan working with Aaron Ridley. The model differs from earlier systems in that it includes more processes, permitting a better understanding of upper atmosphere circulation, especially in regard to the vertical dynamics.

Morteza Khaledi, dean of UTA’s College of Science, called Deng a true innovator in the area of space physics.

“Dr. Deng has already made important contributions to the field,” Khaledi said. “This new project raises the profile of the College of Science and will allow us to give more post-doctoral students, Ph.D. students and undergraduates an extraordinary experience of long-term, highly-visible, cutting-edge national research. ”

Deng joined the College of Science in 2009. In 2010 she received a National Science Foundation Early Career Development Program grant, known as a CAREER grant, given to outstanding junior faculty who exemplify the role of teacher-scholars.

Deng graduated from Peking University with a bachelor’s and master’s degree in space physics before moving to the United States to earn doctorate in space science at the University of Michigan.

The University of Texas at Arlington is a Carnegie “highest research activity” institution of more than 51,000 students in campus-based and online degree programs and is the second-largest institution in The University of Texas System. U.S. News & World Report ranks UTA fifth in the nation for undergraduate diversity. UTA is a Hispanic-Serving Institution and is ranked as the top four-year college in Texas for veterans on Military Times’ 2016 Best for Vets list. Visit  www.uta.edu to learn more, and find UTA rankings and recognition at www.uta.edu/uta/about/rankings.php. 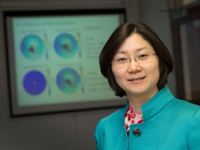