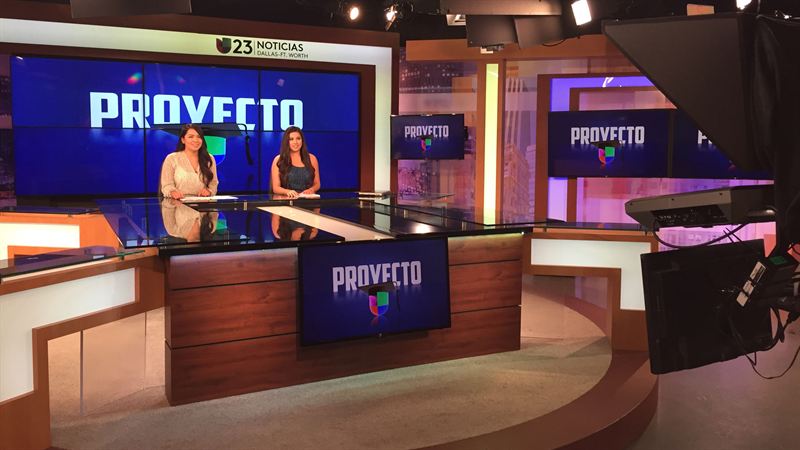 UTA News en Español has been nominated for a Regional Student Production Award from the Lone Star Chapter of the National Academy of Television Arts and Sciences, which is best known for presenting the Emmy Awards. UTA News en Español is the Spanish-language broadcast journalism program at The University of Texas at Arlington.

Martiza Esquivel, Alejandro Jimenez and Lariza Moreno, all senior broadcast majors who will graduate in December, received a nomination for best newscast for their Proyecto U live broadcast.

The live broadcast is the capstone project for UTA News en Español students who participate in a partnership with the Univision television affiliate in Dallas-Fort Worth. Students receive class credit for spending one semester producing, anchoring, directing and reporting for bi-weekly Univision 23 newscasts.

Univision 23 is one of the most-watched Spanish-language television stations in the nation.

Esquivel said the nomination is a result of incredible teamwork.

“Hard work takes place in every step of production,” she said. “The experience and knowledge we gained will certainly assist us in our careers. The mentoring provided by the staff at Univision 23 was priceless.”

“Proyecto U is, without question, one of the most unique programs in the country,” said Julian Rodriguez, UTA News en Español faculty adviser and broadcast communication lecturer. “The graduation rate of students who take part in UTA News en Español is 100 percent. The industry wants to have them.”

Rodriguez added, “It is our responsibility to keep the Hispanic population informed so they can make decisions. If we are able to educate journalists who can focus their professional knowledge on informing this important segment of the population, America can thrive.”