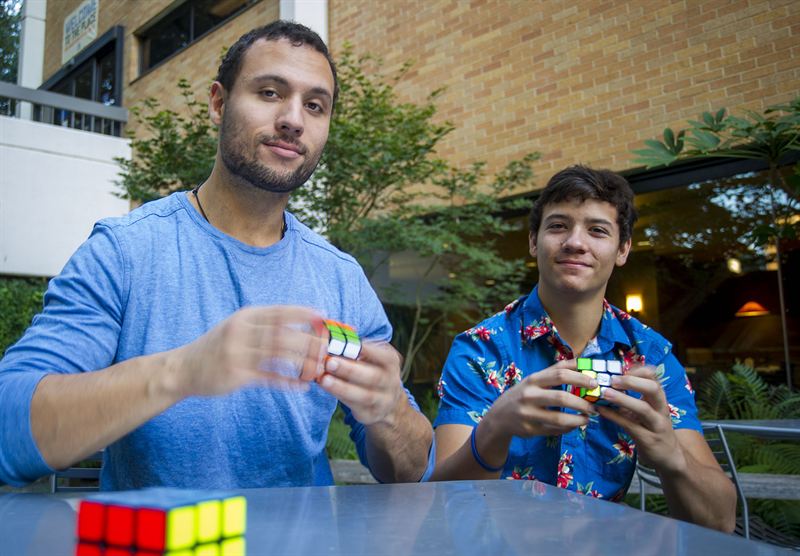 He is always carrying at least one Rubik’s Cube.

Brooks doesn’t fret about solving the puzzle. He can do it less than 10 seconds, and often much less.

The University of Texas at Arlington business management major belongs to a growing corps of dedicated Rubik’s Cube enthusiasts who compete in “speedcubing” on an international stage. It’s a hobby that has taken him throughout North America, South America and Europe. And it’s a hobby he hopes will yield a career eventually.

The Texas native decided on UTA after studying which business schools in his home state had good reputations.

“UTA had a great management program,” said Brooks, who has said that the business and entertainment aspects of the Rubik’s Cube appeal to him. Brooks wants to take what he learns in the classroom and apply it to that Rubik’s Cube business/entertainment model. “Plus, I wanted to come back to Texas after living in Michigan and the Northeast.”

The puzzle also has landed him in a Volkswagen YouTube commercial and attracted sponsors who have sent him to events around the globe. He has a YouTube video of his 6.42-second solve, a North American record at the time.

Even though Brooks says anyone can learn to solve the Rubik’s Cube, few can compete at the world-class level that he’s attained.

“It usually takes me three or four hours to teach someone how to solve the cube for the first time. Really, it’s a step-by-step logical process,” Brooks said. “I’ve just practiced more than most.”

Brooks’ latest feat was a second-place finish at the 2015 World Championship in Sao Paulo, Brazil, in July. He also finished third in the 2015 U.S. Nationals on Hilton Head Island, South Carolina, in August. His all-time best is 6.42 seconds at the 2014 Oklahoma Open. At home, he’s solved the puzzle in under 5 seconds.’

One of his cubing foes is Collin Burns, a 15-year-old Pennsylvania teen, who holds the world record at solving the 3D puzzle in 5.25 seconds.

Watching Brooks twirl the cube is like watching a concert pianist tickle the ivories. He waits for someone to scramble the puzzle, then studies it for 15 seconds or so, then twists, flips and turns the cube until all the tiles line up.

The secret, he says, is viewing the cube as individual pieces, rather than stickers, and moving them into place until all the six sides are a solid shade.

He makes it sound easy, but each time a cube is scrambled the game poses a different challenge. There are more than 43 quintillion ways to scramble a cube, the Rubik’s Cube website says.

The origins of the Rubik’s Cube dates to 1974, when a young Hungarian architecture professor, Erno Rubik, created what some describe as the best-selling toy ever. The puzzle was first called the Magic Cube but eventually took the name of its inventor.

The cube enjoyed a bump in popularity when it was featured in a scene from the 2006 film “The Pursuit of Happyness,” when actor Will Smith solved the cube while riding in a cab. With more than 350 million Rubik’s Cubes sold, the puzzle’s popularity is astronomical.

Brooks began playing with the cube as a high school student in the Rio Grande Valley at the Science Academy of South Texas in Mercedes.

He and his brother, Brian, who also is a speedcuber and a UTA business freshman, spent an hour a day on the school bus from Ranch Viejo, their home, to school in Mercedes, and then back.

“In South Texas, you spend a lot of time on the road,” Brooks said. “I used that time to practice.”

“My obsession with in the cube died down a bit while I was up there,” Brooks said. “Then I started working at the Beyond Rubik’s Cube exhibition in New Jersey. I was the Liberty Science Center’s speedcuber-in-residence while David Blaine was the magician-in-residence. Being exposed to world-class, close-up entertainment is what got me interested in the performance aspect of speedcubing.”

Companies are taking notice now, though, sending the UTA senior to competitions around the globe.

“Without significant prize money at most competitions, it’s always been about individual improvement and bragging rights,” Brooks said. “Now, these competitions are often a great excuse to explore a new area.”

Brooks doesn’t stick to the conventional when solving the cube. He’s solved the puzzle underwater while holding his breath, blindfolded and one-handed.

Now, his base is The University of Texas at Arlington, though.

One of Brooks’ management professors, Marcus Butts, discovered him solving the cube after class.

“Anthony has a true entrepreneurial spirit,” said Butts, upon first seeing his student’s cube prowess. “Anthony understands he need to earn his degree and apply the principles he learns to his talent of solving the Rubik’s Cube so quickly.”

The University of Texas at Arlington is a comprehensive research institution of more than 51,000 students in campus-based and online degree programs and is the second-largest institution in The University of Texas System. The Chronicle of Higher Education ranked UT Arlington as one of the 20 fastest-growing public research universities in the nation in 2014. U.S. News & World Report ranks UT Arlington fifth in the nation for undergraduate diversity. The University is a Hispanic-Serving Institution and is ranked as a “Best for Vets” college by Military Times magazine. Visit www.uta.edu to learn more, and find UT Arlington rankings and recognition at http://www.uta.edu/uta/about/rankings.php.