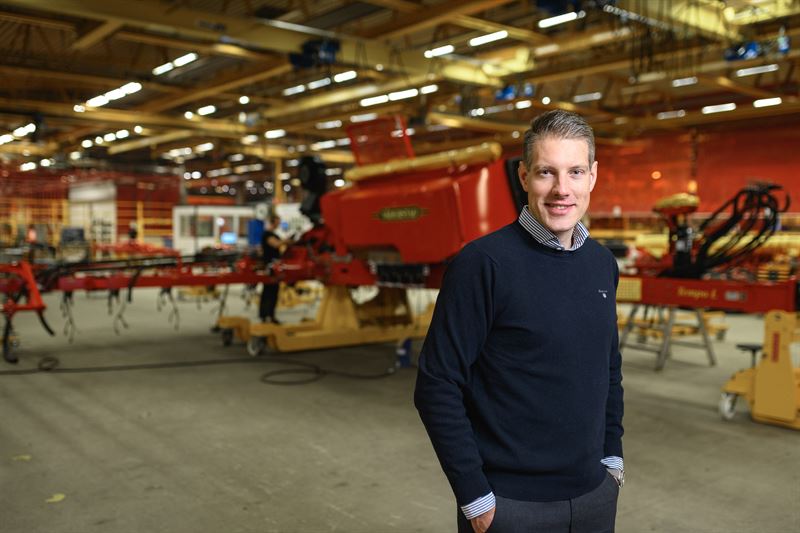 Väderstad, one of the world’s leading companies in soil cultivation and seeding technology, is preparing for its upcoming CEO succession. In February 2022, Henrik Gilstring will take over as President and CEO. Henrik represents the third generation of the owner family and is currently part of Group Management.

Continuity, sustainability and innovation have served as important guiding principles for Väderstad since the company’s inception almost 60 years ago. The company’s Board of Directors has now secured the CEO succession well in advance and preparations have begun for current CEO Mats Båverud to step down.

– The Board of Directors and Group Management have clearly defined the direction forward through a well-planned CEO succession based on Väderstad’s strong values, says Crister Stark, Chair of the Board for Väderstad Group.

– Through longstanding ownership and strong commitment, from both the owners and employees, we continue to create innovation, drive and stability. The decision gives us good conditions for an efficient and smooth handover, and a rejuvenation of the CEO role, says Crister Stark, Chairman of the Board of Väderstad Group.

Henrik Gilstring has previously been appointed deputy CEO of Väderstad Group and, from February 2022, he will take up his post as Group CEO.

– I’m looking forward to continuing to drive Väderstad forward sustainably and to ensure that, as a company, we are able to adapt to the challenges and opportunities ahead, both with regard to agricultural development in general and in terms of new political and global ground rules, says Henrik.

– Väderstad has an acclaimed history of innovation, strong customer relationships, and growth. This is a very exciting journey and it is progressing towards new goals. We have every opportunity to continue growing and evolving as a company, as a partner to our customers, and as an employer.

Henrik Gilstring is 35 years old and represents the third generation of the owner family. He is the son of Christina Stark, owner of the second generation, and Gert Gilstring, who currently works as senior design engineer at Väderstad. Among other things, Gert Gilstring is the brains behind "The Gilstring Seed Meter" – the unique metering system in Väderstad's Tempo machines, which is a big part of the reason for Tempo's huge sales success worldwide. He has also been involved in several of the company's other success concepts.

Henrik Gilstring has worked at Väderstad since 2012 and currently serves as Vice President for Business Development and is a member of Group Management. He has a background as an economist with a degree in business administration from the Stockholm School of Economics. Prior to his present role in Väderstad, Henrik served as business controller of production, sales and marketing, and product development. He also worked on issues related to product management and strategy and served on the board. Before joining Väderstad, Henrik worked for Boston Consulting Group in Stockholm.

– I look forward to handing over the reins to Henrik, whose solid knowledge of the company’s business, products and markets, along with extensive experience and understanding of diverse company operations, will make him an exemplary leader of Väderstad, says CEO Mats Båverud.

– He is fully capable and is supported by a very competent management team.

Väderstad provides modern agriculture with innovative, highly efficient agricultural machinery and methods. By simplifying work and improving results for the farmer, the company's vision is to become the world’s leading partner for outstanding emergence. The group is family owned and the head office is located in Väderstad, Sweden. Väderstad is represented in 40 countries and on all continents. In 2019, Väderstad had 1,500 employees and a turnover of MEUR 335.