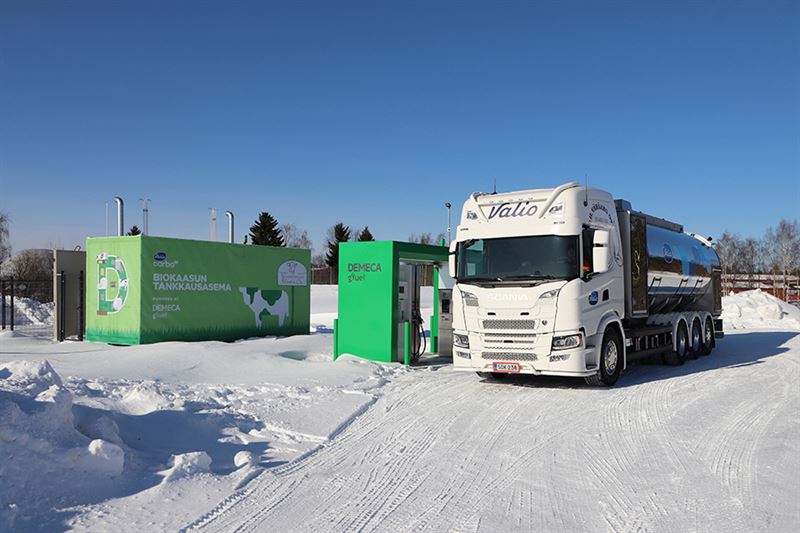 Reducing HGV traffic emissions is an important part of Finland’s 2035 carbon-neutrality target. One of its solutions can be found in cow manure: it can be made into biogas that can, in the future, replace fossil diesel fuel, which is what HGVs in Finland currently run on. The Vuorenmaa dairy farm has written a new page for the history books, as Finland’s first manure-powered milk truck filled up with the farm’s own renewable biogas.

The Vuorenmaa dairy farm, in Haapavesi, has 180 cows that produce milk for Valio’s local dairy, where it is made into Valio Oltermanni® cheese. For years, the farm has used the manure its cows produce to generate electricity and heat for the farm at their own biogas plant. For the first time, that biogas has begun to fuel a Valio milk truck. Using biogas as vehicle fuel is a part of Valio’s programme that aims to reset milk’s carbon footprint to zero by 2035.

“The Vuorenmaa farm’s biogas plant currently produces roughly 1,900 Mwh of biogas every year. We were overhauling the plant’s equipment and decided to expand its functions to produce biogas fuel. The milk truck from our local dairy at Haapavesi can fill up at our farm at the same time as they collect our milk. In the future, the fuelling station near the farm will also provide biogas for passenger cars”, says Janne Vuorenmaa, who runs the farm with his brother and family.

In the beginning, half of the gas they produce will be refined into biomethane, which is suited for use as vehicle fuel. If all that gas were to be used in milk trucks, it would be enough for a mileage of over 350,000 kilometres per year. For now, there is only a limited amount of biogas for passenger cars. It will be possible, however, to increase the plant's refining capacity to meet demand.

Roughly 15 million tonnes of manure is generated every year in Finland. Usage of agricultural side flows is, however, still taking its early steps in Finland, and using pressurised biogas that is made of cow manure is a completely new development. Biogas will also play an important role in reducing not only traffic emissions, but also in reducing agricultural ones.

“The biogas plant is a part of our farm’s regular nutrient circle. Its process transforms the nutrients in the manure into a form that is more useful in the fields. When we need to buy less fertilizer, it benefits both the environment and our accounts. It also improves the farm’s self-sufficiency when it comes to energy. Selling farm-produced fuel is another business opportunity”, says Janne Vuorenmaa.

“Using biogas can reduce fuel's lifecycle greenhouse gas emissions by up to 85 percent compared to diesel, which is what our milk collection and distribution trucks run on. At the same time, the dairy farm's own carbon footprint goes down significantly, by one fourth or fifth, depending on the method of calculation”, says Valio’s Development Manager Petteri Tahvanainen, who is responsible for Valio's vehicle fleet.

“The Vuorenmaa dairy farm is a fantastic example of the ways Finnish farmers can solve environmental and climate challenges together with local businesses. At the same time, the farms can create new business, that is, new cashflow into the countryside, while improving our fuel-related self-sufficiency”, continues Tahvanainen.

The biogas plant and the biomethane refining and refuelling station was manufactured by Demeca Oy, a company local to Haapavesi.

“We have spent a long time developing our biomethane refining unit and trialled various technical solutions. Now, a milk truck can refuel at the farm every day and the equipment is running well”, says Demeca Sales Director Sami Vinkki.

“We want to create new business opportunities for farmers and to improve the field’s respectability. Our job is to improve farm profitability as well as animal and human wellbeing. This is yet another project where that has been a resounding success. I very much like to refuel one of our cars at a customer’s farm. And the farm gets to keep all the profit”, says Vinkki.“A network of various local businesses has formed around the Vuorenmaa farm. They are close to the Haapavesi Cheese Factory, which means it is easy to refuel the milk truck during its collection run”, says Pohjolan Maito cooperative's Managing Director Marko Puhto.

The milk is collected from the farm with transportation business H. Vähäaho Oy’s new milk truck.

“When this project started about a year ago, we were very excited. It's been a joy to see that all our partners have been just as excited to take part. There have been no significant surprises, as everything worked as planned, both for the refuelling system and the truck. Some people may say that such as small act is not enough to save the world, but we are excited to be a part of such a chain that can result in concrete reductions in greenhouse gas emissions in the places that we live and breathe”, says H. Vähäaho Oy’s Sami Vähäaho.

How is biogas made? What else is made from manure?

Put simply, this is how it works: The manure is fed to the biogas plant through a pipeline from the barn. Other matter, such as grass or spoiled feed can be mixed in the manure. The mixture is pumped into the biogas reactor, where it decomposes in an anoxic container. The gas rises to the top of the reactor, from where it is collected and purified for use. This process takes 30–40 days.

In biogas production, the manure’s fertilizing capability improves, and the smell is removed. The manure turns into a material of uniform quality that is so rich in nutrients that it is possible to reduce the use of commercial fertilizer. This saves both money and the environment. The refined manure produced in the biogas plant can also be separated into dry and liquid fractions. The liquid, which contains the nutrients, can be used to fertilize the fields. The dry fraction, on the other hand, is so dry and high in quality that, in addition to its use as a fertilizer, makes it possible to use it as litter for the cows’ bedding instead of peat or sawdust.

Valio - The world’s most innovative dairy and food company

Valio’s mission is to create wellbeing and taste sensations in a responsible way. We make tasty products from milk and many other ingredients; we bring delightful tastes, variety and joy to the food table. We also carry out important roles in society: ensuring food security, enhancing public health and improving animal welfare are some examples of our impacts. In line with our mission, we are making life better. This is also the conclusion of the Finns who have chosen Valio as Finland’s most sustainable brand for seven consecutive years.

4,300 Finnish dairy farmers own Valio through cooperatives. We pay out all the profits to our milk producers through the milk price. We employ a total of 25,000 people at dairy farms. Valio has 4,000 professionals at work from different sectors and we listen to consumers with our more than 100 years of experience.

Nobel Laureate A.I. Virtanen’s legacy continues to live on with us. When he headed Valio’s laboratories, the concept of improving the wellbeing of people took root as our guiding principle. We turn science into products that make life better. Consumers in more than 60 countries enjoy Valio products, and we have 350 patents for our innovations around the world. We are Finland’s biggest food exporter and a trailblazer for the whole food industry. Valio’s sales in 2019 were EUR 1,787 million.