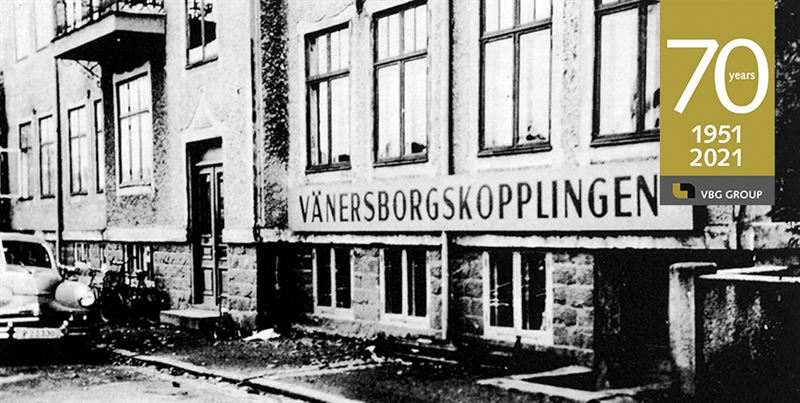 From a basement in Vänersborg to a global industry group operating in 17 countries, sales in even more countries and system solutions being used all over this world, as well as on the planet Mars. The VBG Group has been making this journey for the last 70 years. A piece of Swedish industrial history that is still going on.

It is the 3rd of January 1951 and Herman Krefting decides to found the "Vänersborgskopplingen" company, today's VBG Group origin. Herman Krefting is an active civic citizen and very interested in road safety issues. The industry is booming in Sweden and road transport is increasing. Nasty accidents are common and Herman Krefting sees an opportunity to create safer transport with his technical skills.

“There’s nothing more dangerous than a driverless trailer”, Herman is supposed to have said when he started his business. The desire to create a safer society has accompanied the VBG Group since its inception and is still the driving force behind the company.

Today, the VBG Group is a global industrial group with operations in 17 countries and more than 1500 employees. Over the years, the company has acquired and divested businesses. The company made a major change in the 90s when it sold its division for passenger car tow bars and acquired the German company Ringfeder. In the 2000s, the company chose to divest its fifth-wheel business and in 2016 carried out the largest acquisition in the company's history when it bought the Swedish Mobile Climate Control Group Holding AB.

VBG Group has a unique ownership structure that Herman Krefting laid the foundation for in the 80s when he formed three foundations to which he transferred a large proportion of shares to ensure future development of the company and safeguard employees’ jobs. These foundations became VBG Group's principal owners.

The third and the largest foundation – both in terms of shareholding and voting rights – is the Herman Krefting Foundation for Allergy and Asthma Research. Herman Krefting himself was asthmatic and could see himself the progress science and research could achieve.

Through this unique ownership structure, VBG Group’s profit over the years have in turn led to asthma and allergy research receiving approximately SEK 165 million. In 2020, a collaboration was initiated with Universeum in Gothenburg, where the foundation will donate SEK 50 million to a new life-science centre.

VBG Group AB's B-share was listed in 1987 and is currently on the Mid Cap list on Nasdaq Stockholm. In addition to the foundations, there are currently over 4,000 shareholders who have successfully collaborated with the company ever since the listing. An investment in VBG Group has over the years given a good return.

A successful concept for VBG Group is the acquisition of businesses with strong brands that can be leaders on their niche markets or have the potential to be. VBG Group also has a solid industrial knowledge that permeates throughout the business.

“Clearly, we have been successful in our strategy for the last 70 years. We also have the benefit of our unique ownership structure being able to act long-term. I foresee and believe that we have a very exciting future ahead of us”.

Today, the Group consists of seven strong product brands offering solutions in climate systems for buses and off-road vehicles, solutions for mechanical power transmission, as well as energy and shock absorption, truck couplings, automatic snow chains together with sliding roofs and roof arches for trucks and railway wagons. These solutions help in society with everything from damping to protect buildings in the event of earthquakes to transporting children safely to school.

Anders Birgersson, who himself will be celebrating 20 years as CEO of the company in 2021, is looking forward to leading the company into the future:

“2020 was a different year on many levels and I look forward with hope to 2021. Creating a safer society through our solutions is and will remain our driving force. Today, we know that we are making a difference in the businesses and markets where we step in. I look forward to continuing the path we are on. We shall acquire and develop businesses and spread our know-how globally. What we do, we do long-term and sustainably”.

VBG Group AB (publ) in Vänersborg is the parent company of an international engineering group with wholly-owned companies in Europe, North America, Brazil, South Africa, Australia, India and China. The business is divided into three divisions, Truck & Trailer Equipment, Mobile Climate Control and Ringfeder Power Transmission, with products marketed under well-known and strong brands. VBG Group AB's B-share was listed in 1987 and is currently on the Mid Cap list on Nasdaq Stockholm.