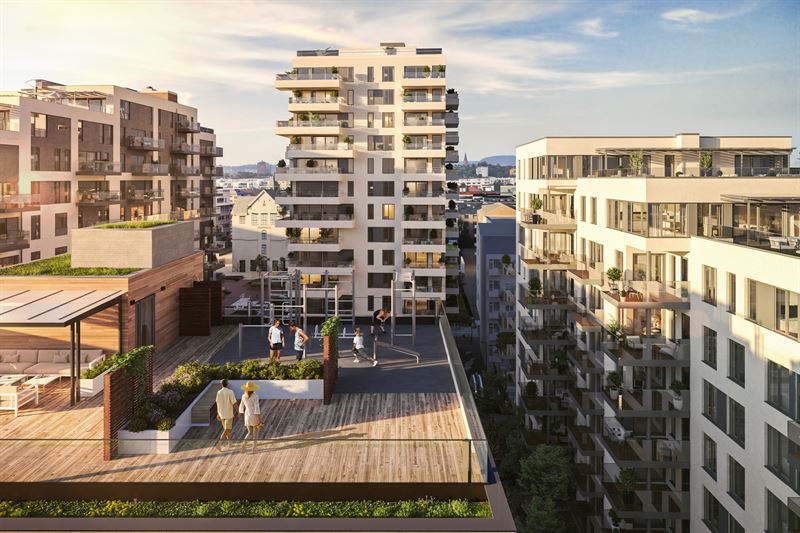 Veidekke has today signed a contract with M17 Utvikling AS (50/50 OBOS and Veidekke Eiendom) to build the Middelthunet housing project with 329 apartments at Majorstua in Oslo. The contract is worth around a billion kroner excluding VAT. Over the course of five months, homes to the value of NOK 1.6 billion were sold in the project.

“There has been tremendous interest in these apartments. In the first release, 42 out of 46 apartments were sold within an hour and a half, and in the second stage, everything was sold out within an hour. The present status is that 185 out of 235 have been sold. Even though the last building with 94 homes doesn’t go on sale until the new year, we are starting construction of the entire project now,” says Executive Vice President of residential development at OBOS, Arne Baumann.

At Middelthunet, Nordea's old head office is being replaced with homes that still provide light in the windows and life on the streets after office hours. This will be a state-of-the-art and attractive living environment with large outdoor areas and a multitude of possibilities.

"We are proud of the project that we have developed in good, close cooperation with OBOS ever since we bought the site together in 2011. This is the largest building contract for a residential project in Veidekkes's history, and as far as we know it is also the largest in Norway. We are looking forward to finally getting started on construction," says Veidekke CEO Jimmy Bengtsson.

The Middelthunet project consists of three buildings of 10, 12 and 14 floors respectively over an underground car park, a total of 45,500 m2 gross (BTA) including a kindergarten. The 329 apartments will have a high standard and quality and range in size from 43 m2 to 390 m2. The location is very attractive, adjacent to Frogner Park and with shops, culture, restaurants and transport hubs in the immediate vicinity.

The project (demolition and construction work) will be fossil-free. The demolition works have already come a long way, while the work on the foundations starts in October/November. The apartments are scheduled to be completed during the course of 2022. Find more information about the project here: www.middelthunet.no