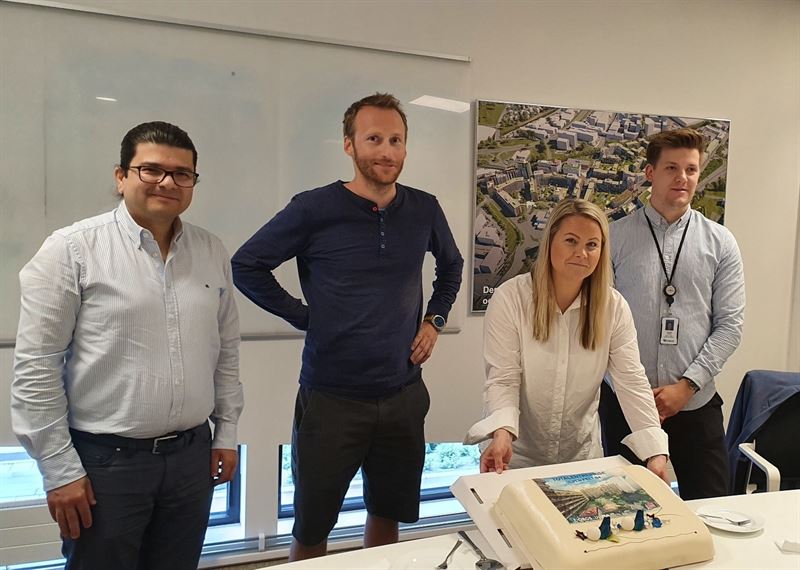 Team Veidekke DA has been commissioned by Ulven Bolig AS (OBOS) to undertake another stage of construction, comprising 182 apartments, underground garage facilities and outdoor facilities. The contract is a turnkey contract valued at around MNOK 365, excluding VAT. Ulven is one of OBOS’ largest ever development projects, with nearly 3,000 apartments.

The new site has been named Ulven Vest and is the second such site developed by Team Veidekke. The finished project will have beautiful parks and market squares in the immediate vicinity, underground parking and car-free sections of street on both sides. The location is central in what will be the new Ulven, with only a short walking distance from the shopping centre and metro station at Økern. It is a continuation of the concept for the first 342 apartments from the innovation bid in 2017.

“Thank you for commissioning us. Ulven Vest is an exciting project in which, together with OBOS and our partners, we have further developed our concept from the initial site at Ulven. Together, we have come up with what we believe to be the future of collaboration when it comes to constructing attractive housing that is affordable to most people,” says Anders W. Haugen, Director at Veidekke Bygg Oslo.

“It is extremely satisfying that we can now conclude the next site at Ulven together with Team Veidekke. The collaboration and the process have been outstanding and we look forward to getting started with the construction. It is impressive that, together, we are able to construct Ulven at much lower costs than most of our other housing projects. The quality and outdoor areas at Ulven are at least the equal of the other OBOS projects in Oslo,” says Nils Morten Bøhler, CEO of OBOS Eiendom AS.

“At Team Veidekke, we are really starting to see the benefits of this way of thinking and organising. We work together at Ulven three days a week, ensuring an excellent sense of ownership and continuity and together we identify the best, most cost-effective and rational solutions. We are now looking forward to getting started on the construction of yet another site here at Ulven,” says Project Manager and General Manager Espen Stordal from Team Veidekke.

The contract is included in Veidekke’s order book for Q2.

Veidekke is one of Scandinavia's largest construction and property development companies. The company undertakes all types of building construction and civil engineering contracts, develops residential projects, maintains roads, and produces asphalt and aggregates. The company is known for its engagement and local knowledge. Annual turnover is approximately NOK 39 billion and around half of its 8600 employees own shares in the company. Veidekke is listed on the Oslo Stock Exchange and has always posted a profit since it was founded in 1936.