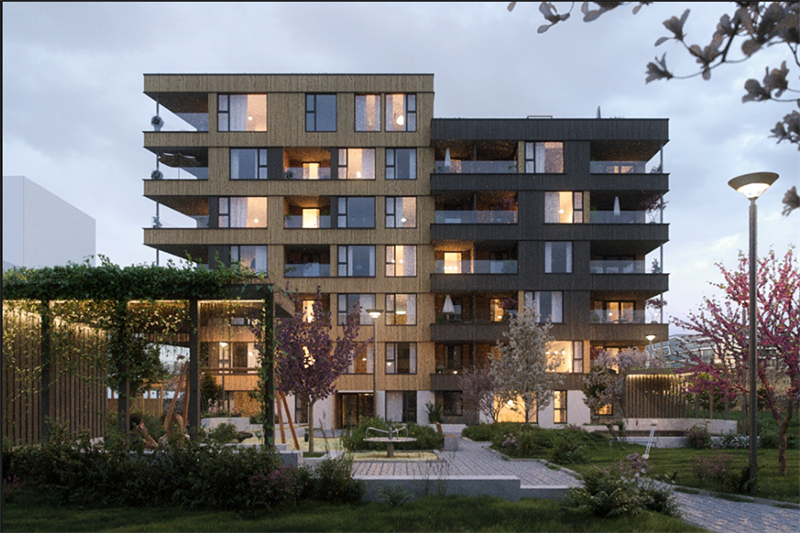 Veidekke has been awarded the contract by Øgreid Eiendom AS to build the first stage of the Søstrene Hinna residential project at Jåttå in Stavanger. Here Veidekke will build 51 residential units in four terraced houses and two apartment blocks, in addition to a common underground parking facility. The contract is a turnkey contract valued at NOK 120 million, excl. VAT.

In total, the Søstrene Hinna residential project will comprise 18 terraced houses and 124 apartments across three building stages. The contract with Veidekke concerns the first 51 homes in the buildings B1, BB1 and BB2 totalling around 8,000 m2, including storage rooms and underground parking that will be readied for further development and connection with the subsequent building stages.

“Veidekke has extensive and good experience with carrying out construction of housing projects of this scale. This is a great project in an interesting development area in what is becoming one of Stavanger’s most attractive districts. We would like thank to Øgreid Eiendom for the contract and are looking forward to getting started on construction work after the summer,” says director Are Westbye of Veidekke Bygg Syd.

Søstrene Hinna is the starting point for the development of Hinna Park. When fully developed the area will comprise around 1,500 new homes and 6,000 workplaces. Attractive outdoor areas and parks will also be developed in connection with the project.

“In our project we have emphasised developing homes of high architectural quality and good common areas with social zones and guest bedsits, that we call homes according to the Øgreid Eiendom standard. Start of construction has been approved, and home buyers will be a part of a safe and predictable journey from purchase to occupation,” says general manager Erlend Aanestad of Øgreid Eiendom.

Start of construction is planned for September, and the homes are scheduled to be ready for occupation in the course of 2023.

Veidekke is one of Scandinavia's largest contractors. The company undertakes all types of construction and civil engineering contracts, maintains roads, and produces asphalt and aggregates. Veidekke emphasises stakeholder involvement and local experience. Its annual turnover is approx. NOK 38 billion, and around half of its 8,100 employees own shares in the company. Veidekke is listed on the Oslo Stock Exchange, and has posted a profit every year since its inception in 1936.