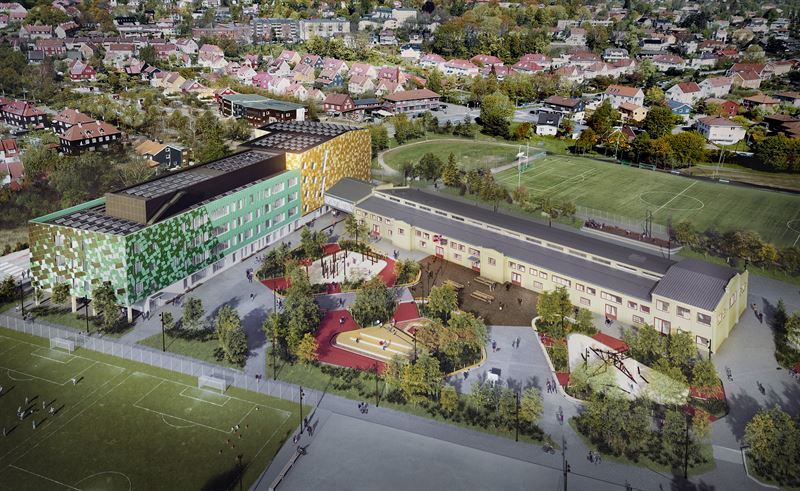 Veidekke has entered into a contract with Undervisningsbygg Oslo KF to build the new Voldsløkka Secondary School in Oslo. The City of Oslo has major environmental ambitions and the school is being built as an energy-plus building. The project is a turnkey contract valued at NOK 477 million, excluding VAT.

The new school will cover approximately 14,000 square metres in total across a four-level new build, as well as the listed Heidenreich building, which will be fully renovated. The school will be built as a secondary school with eight parallel year groups for 810 pupils, 75 teachers, as well as administrative staff.

“The Voldsløkka School project will transform a beautiful old building, the Heidenreich building, and, in combination with an environmentally friendly and energy-efficient newbuild, will create an outstanding contemporary school. This presents a number of evolving opportunities and demanding challenges, which we will resolve in close collaboration with Veidekke,” says Tore Moger, Head of Department at the Project Department of Undervisningsbygg Oslo KF.

The newbuild at Voldsløkka will be built as an energy-plus building with solar panels both on the roof and on the facades. There are high environmental ambitions for the building process as well. Machinery at the construction site will, as a minimum, use fossil-free fuel and the aim is to use the highest possible level of emission-free solutions.

“We look forward to embarking upon another exciting school project for Undervisningsbygg. We are very excited to be able to work on such an environmentally ambitious project. The use of sustainable solutions across all phases of a construction project is also in line with Veidekke’s environmental ambitions,” says Erik Økland, Department Manager for Public Construction Projects at Veidekke Bygg Oslo.

Start of construction is scheduled for April/May 2020, with completion scheduled ahead of the start of the 2023 academic year.

Veidekke is one of Scandinavia's largest construction and property development companies. The company undertakes all types of building construction and civil engineering contracts, develops residential projects, maintains roads, and produces asphalt and aggregates. The company is known for its engagement and local knowledge. Annual turnover is approximately NOK 39 billion and around half of its 8600 employees own shares in the company. Veidekke is listed on the Oslo Stock Exchange and has always posted a profit since it was founded in 1936.