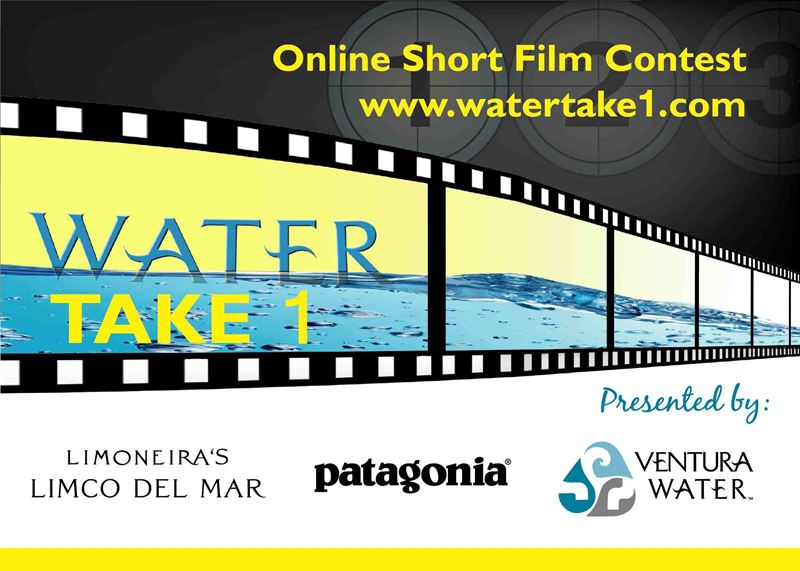 Entries to be judged by influential members of the Film, TV and New Media Industry

Filmmaker submissions are being accepted immediately at www.watertake1.com. Eligible submissions are recent short films under five minutes that address the topic of water in any genre, including documentary, drama, comedy, animation, sci-fi or experimental. There is no fee for submission and videos will be online and able to be viewed upon acceptance.

“Our country is undergoing a national water crisis involving water shortage and aging infrastructure,” said Ventura Mayor Mike Tracy before a screening and reception held at the Museum of Ventura County and attended by 200 local community leaders and influential stakeholders. “This contest is an effort to draw attention to this local, national, and global issue as we work together to find solutions through education and partnerships.”

The submission period for entries is March 22-September 4, 2012 at www.watertake1.com. Ten finalists will be named and a jury-awarded Grand Prize of $1,500 will be presented to the Grand Prize Winner at an event hosted by The Brooks Institute later this fall. Users visiting www.watertake1.com will have an opportunity to vote for their favorite entry. The Filmmaker winning the “Audience Choice” award will receive a Canon EOS 7D Digital SLR camera.

“The City wanted to make an impact and reach as broad an audience as possible”, noted Project Manager Rachael Shapiro. “Of all the options, empowering filmmakers to put their talents to the test and create a living, visual message presented the best opportunity.”

The contest is being hosted by online distributor iThentic (www.iThentic.com) which has a history of mounting successful entertainment contests and campaigns. Most recently, iThentic partnered with the Canadian Film Centre for its online festival, ShortsNonStop, and launched the interactive web series Guidestones.

“iThentic showcases online the best new work from international content creators working in all genres and media”, notes iThentic CEO Jonas Diamond. “We are delighted that an environmentally focused initiative such as Water: Take 1 allows us to shine a light on the best work and share an important message as well. It is a win-win all around.”

The inaugural Water: Take 1 Online Short Film Contest brings together leading experts in the fields of water conservation, recycling and resource management with partners in online entertainment media production and distribution. It serves as a mechanism to create a social network of online content and extend the national reach of Ventura Water and its partners. The distinguished jury made up of leaders in water and environmental issues, entertainment professionals and influential members of the community are as follows:

Sally Habbershaw, Vice President, Scheduling, Acquisitions & Promotions, AMC / Sundance Channel Global, who is a 19 year industry veteran with an extensive background in broadcast, cable television and digital programming, both domestically and abroad. Sally joined AMC/Sundance Channel in 2011. Prior to joining, she served as a key strategic consultant to Gawker Media where she created and implemented a content strategy across Gawker’s bouquet of digital platforms.   She has held several positions at Viacom including Vice President and General Manager of VH1 UK overseeing VH1, VH1 Classic, VH2 and TMF, and Director of Development at VH1 USA where she was integral to the network achieving its best ratings historically during her tenure.

Kathleen McInnis, Founder, See-Through Films, Film Curator and Director of Industry Programming, Palm Springs ShortFest. Kathleen McInnis is a Film Strategist with a distinctive background in Film Festivals and Publicity Consulting. A veteran of the global film festival circuit, Ms. McInnis has been Festival Director, Director of Programming (Film Curator and Industry Programming), and Director of Publicity at such festivals as Seattle International Film Festival, Slamdance Film Festival and (currently) Palm Springs ShortFest. Ms. McInnis was the inaugural Film Festival Specialist at Loyola Marymount University School of Film & Television, and currently teaches film festival strategies at NYU-Tisch/Asia and UCLA School of Theater, Film and Television. She was an Editor-at-Large for MovieMaker Magazine, and VP of Filmmaker and Festival Relations at FilmFestivals.com. Ms. McInnis is also the co-creator of the SIFF Fly Filmmaking Challenge, and has produced nearly 3 dozen short films, both with the program and independently.

Jane Sievert, Managing Photo Editor, Patagonia, Jane Sievert has over two decades of experience working with photographers and filmmakers. As Patagonia's managing photo editor she reviews close to 100,000 photos a year as well as helps to curate the Patagonia media gallery. She is a staunch supporter of the artists who take on conservation issues and has first hand experience on how film and photography can have positive effects from both a policy and personal standpoint. Jane has researched water issues for Patagonia's current environmental campaign and has extensive knowledge on the topic of water conservation and scarcity. Jane is a long time Ventura resident; her daughter attends Ventura HS. In addition to working in photography and multimedia, Jane teaches Yoga at a local studio. She is a nature lover, a committed conservation activist and looks forward to getting involved with her community on this level.

Scott Slater, Shareholder, Brownstein, Hyatt, Farber, Schreck, An experienced litigator, Scott's legal practice now emphasizes negotiation and strategic planning for clients seeking to secure new water supplies and assisting them in meeting their objectives for reliability and sustainability. Scott serves as special water counsel to investor-owned utilities, private equity groups, private corporations, special districts, cities and large landowners. Scott has more than 24 years experience representing clients in complex water matters, predominantly in the Western United States. He has conducted transactional counseling, negotiated and drafted proposed legislation, and represented clients in groundwater litigation and stream adjudication. He has also handled water resource and water quality cases before the California State Water Resources Control Board, the Public Utilities Commission and state and federal courts. An accomplished author and public speaker, Scott is frequently called upon to present at national water and environmental conferences. He is the author of a two-volume treatise titled California Water Law and Policy. He has served as an adjunct professor at the University of Pepperdine School of Law (1996-2002), a visiting lecturer at the University of Western Australia and at various universities in the People's Republic of China. In addition, Scott has been appointed to water management boards and called upon repeatedly to serve as an expert witness in water law and the professional standard of care for water lawyers.

Nicole Torre is President of New Angle Media, which is devoted to bringing important social and environmental issues into focus. Her debut documentary feature film, Houston We Have a Problem, has played at film festivals around the world and received a 2011 Emmy nomination for Outstanding Long Form economic and financial reporting. Nicole also won the Best Director’s Award at the Docuwest Film Festival as well as The Best Point of View Award, at the Eco Focus Film Festival at the University of Georgia. The film was selected to play at the Museum of Modern Art as part of their 2010 Documentary Fortnight and opened the Environmental Film Festival at Yale University. It premièred on Planet Green as part of their Reel Impact series, and has worldwide distribution with Mercury Media. Nicole also works as an Executive Producer for television. She has created and produced with such networks as Bravo, Oxygen, Planet Green, Nick Jr., and Noggin, as well as with several other production companies. She was commissioned to be a Hothouse Producer for Discovery Communications, where she developed for such networks as Discovery, TLC and Animal Planet.

Ventura Water has partnered with agricultural leader Limoneira and environmentally-conscious apparel retailer Patagonia, among others, to bring the message of Ventura Water to as broad an audience as possible. Programmatic actions for the first year will focus on partnerships by supporting Surfrider Foundation’s Ocean Friendly Gardens, a trend that is transforming lawns into beautiful low-water use landscaping. By “reaching across the meter,” Ventura Water plans to connect customers to more engaging tools, resources and information to raise awareness and change behaviors. Incentive programs such as rain barrels will reinforce the value of wise water use. Education will remain a top priority through school presentations, facility tours and exciting outreach through Social Media and videos. Other partners include the Brooks Institute, which will host the contest’s Award Presentation Ceremony and engineering firms Corollo Engineers and Kennedy/Jenks Consulting. Strategic partnerships are also a large part of this venture and include local organizations the AWA, the AWWA, Surfrider Foundation, Friends of Ventura River, The Matilija Coalition, The Ventura Hillsides Conservancy and Film Ventura.

Ventura Water, the City of Ventura’s Water Department, is dedicated to serving our beautiful coastal community with quality drinking water and water reclamation services 24 hours a day, 365 days a year. Delivering drinking water from local sources since 1923, cleaning water for more than a century, and preventing storm-water pollution for the past two decades, we support Ventura’s vitality. Our goal is to integrate water management to create long-term health and economic benefits for our community. As financial stewards, our goals are to operate and use resources efficiently, understand and meet the needs of our customers, and protect our infrastructure by investing wisely in maintenance and renewal projects. We believe that true water sustainability -- where the needs of the human population and the environment can live in balance –- will be achieved only when choices are made collectively to use water efficiently in all ways to restore our watersheds and protect our children’s future.

The Limoneira Company was founded in Ventura County, California in 1893. Its founders were pioneers of spirit and vision that helped build the foundation of a thriving California citrus industry. Over time Limoneira has evolved into a prosperous global agribusiness and community developer whose mission is to preserve and promote its tradition, heritage and legacy in agriculture, community development and stewardship to maximize value for its shareholders. While revering our past, we look towards our future with optimistic excitement. We have made strategic investments in our agribusiness, real estate, and water and energy businesses. Our sustainably produced lemons, oranges, avocados and specialty citrus reach consumers and market partners around the world. Today Limoneira is the largest avocado producer in the United States and the largest vertically integrated lemon supplier in California. Limoneira is a sustainable community builder with over 2,000 entitled dwelling units located in ideal coastal climates. Our planned live-walk-work communities include elementary, high school and post secondary educational facilities, parks, green space, civic facilities and retail and light industrial opportunities. Limoneira is also the largest provider of work-force housing in Ventura, County California.

Patagonia started as a band of climbers and surfers: We want to stay out as long as we can doing what we love, no matter the weather. Our design approach to every product, from climbing shells to wetsuits to sportswear reflects this. Quality is impeccable and the guarantee lifelong. Our love of wild places demands that we help reverse the decline in the planet’s health. We use only organic cotton; most polyester is recycled and most products are recyclable. We give 1% of sales – $34 million to date – to support grassroots environmental groups.

iThentic is an online video content production and distribution company with offices in Toronto and New York City. Launched in 2006, iThentic is carving out a place for independent filmmakers on digital platforms by aggregating, producing, and distributing the very best in independently produced content. The company is backed by three engaged and prominent shareholders: eOne Entertainment, Canada’s largest entertainment company, the founders of iThentic LLC (led by Catherine Tait), and Smiley Guy Studios, an award winning animation and new media studio. Smiley Guy Studios is the operating partner with Jonas Diamond as CEO and Catherine Tait as Chair of the company.