An innovative project in Sweden enables residents to travel no more than a minute to access everything from outdoor gyms, urban gardens to playgrounds and social hubs. The idea is inspired by the 15-minute city urban planning concept in which everything you need can be reached within 15 minutes. The ‘Street Moves’ initiative, developed by Sweden’s national center for architecture and design, aims to be implemented nationwide in the next decade, so that every street in Sweden is healthy, sustainable and vibrant by 2030. 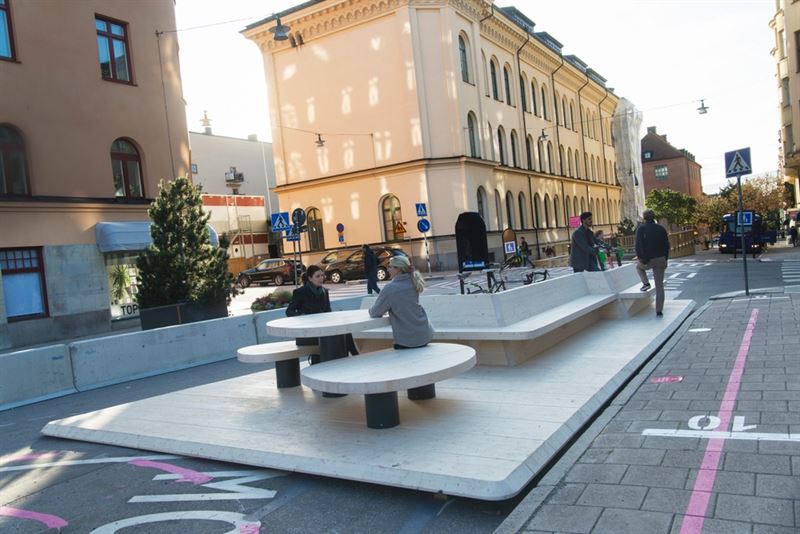 “There is so much potential to develop what urban space can be used for. For the past 60 years, we’ve planned our cities around cars; now it’s time to start designing streets for other things, such as satisfying an increasing need for greenery and meeting places in the city,” says Daniel Byström, project manager for the project Street Moves at ArkDes Think Tank.

The building kit, which is designed by LundbergDesign, consists of an expandable wooden platform with modular parts that can be placed on top to offer functions such as electric charging stations for cars, parking for electric scooters, outdoor gyms, and gardens. The idea behind the kit is to give cities the possibility to use more of their public space for people, rather than cars and vehicle traffic. The kit is inspired by the way cities like San Francisco have turned unused areas in the city into small parks.”We want people to test, feel and experiment with the building kit to discover what they want to do on their street. It’s only when we actually change streets that we can really improve the quality of life for residents and reduce the climate impact in our increasingly dense cities,” says Linda Kummel, head of ArkDes Think Tank.

In addition to Stockholm, the Swedish cities Gothenburg and Helsingborg are also evaluating the building kit.

While developing the kit, ArkDes Think Tank gathered several players who do not usually collaborate, including the City of Stockholm, the Swedish Transport Agency, the car-sharing company M, Volvo Car Mobility, and the electric scooter service Voi. The project is funded by the innovation agency Vinnova.