Volvo’s first electric bus now on the roads of Gothenburg 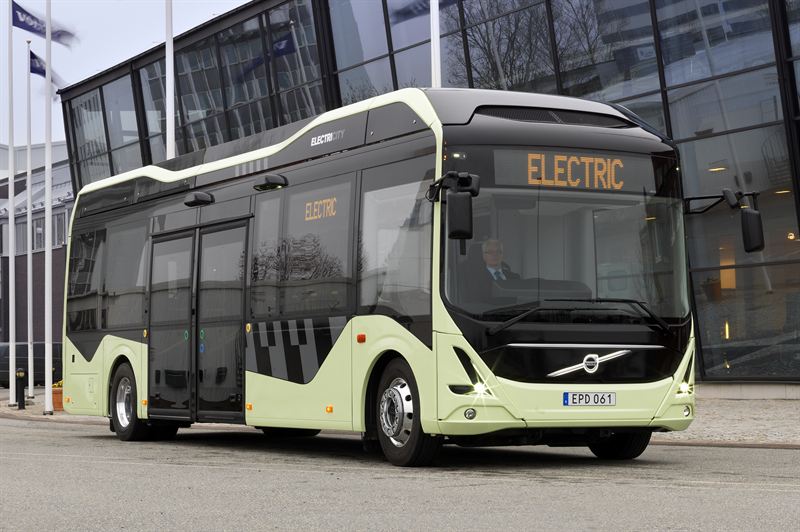 Quiet, exhaust-free and passenger-friendly. Volvo Buses’ new electric bus is now being tested for the first time in regular traffic in Gothenburg. Ahead of its official premiere on June 15 there remain some technological fine-tuning and driver training. What is more, it will be shown at the renowned public-transport fair in Milan.

Mid-June will see the start of traffic on route 55 between Lindholmen and Chalmers/Johanneberg in Gothenburg. This new route will be served by three all-electric buses and seven electric hybrids, all from Volvo Buses. The vehicles are equipped with battery packs that can be quick-charged with renewable electricity at their end terminals. Energy consumption of the electric buses is about 80 per cent lower than that of corresponding diesel buses. The new route is the result of a cooperative venture known as ElectriCity, which develops, demonstrates and evaluates innovative solutions for future sustainable public transport.

Before it enters regular operations Volvo’s new electric bus will also be shown at the large UITP public-transport show in Milan on June 8-10. UITP brings together public transport purchasers from all over the world who come to see the latest developments in the industry.

“Right now we are carrying out final testing to ensure everything works just as it should when regular traffic gets under way. This marks a major milestone in our development of new solutions for electrified buses. Quiet and entirely exhaust-free operation will contribute both to a better urban environment and reduced climate impact, while passengers get a more pleasant ride,” says Håkan Agnevall, President Volvo Buses.

Passenger wishes have also shaped the design of the new electric buses in several ways.

“For instance, all boarding and exiting is quick and convenient via an extra-wide door opening with a low entry in the middle of the bus. Here there is a large area with a low, flat floor, to make things easier for passengers with child buggies or wheelchairs.”

Volvo’s designers aimed to give the bus a modern and welcoming atmosphere. The interior is bright and airy and there are electrical power sockets for passengers to recharge their mobile phones. The bus features onboard Wi-Fi. Although the bus is just 10.7 metres long (more than a metre shorter than a conventional bus) it can carry up to 86 passengers. The central driver’s seat contributes to high passenger capacity.

Commercial launch in 2017
The Volvo Buses range of electrified buses includes the previously launched Volvo 7900 Hybrid, which has been a major commercial success with more than 2000 units sold, and the Volvo 7900 Electric Hybrid which was launched in autumn 2014. Unlike these two, the new electric bus is a concept vehicle. Series production of all-electric Volvo buses is scheduled for 2017.

The electric bus is part of ElectriCity
Traffic with electric buses on route 55 in Gothenburg is a result of ElectriCity. This is a cooperative venture between the research fraternity, industry and city planners, for the purpose of developing, demonstrating and evaluating next-generation sustainable public transport. Among the participants are Volvo Group, Chalmers, the Swedish Energy Agency, Region Västra Götaland, Västtrafik, Keolis, the Municipality of Gothenburg, Göteborg Energi, Lindholmen Science Park and Johanneberg Science Park.

The story of Volvo Buses is a story of success. As one of the world's largest manufacturers of buses and coaches we have reached a leading position in many significant areas. But our story is much more than history. It’s a statement of what we stand for, what we want to achieve and how we see our role in society. Through world-class engineering we help cut energy and resource consumption. By clearly stating our values we attract the people who best can help us reach our goals. And by listening to our customers we are able to offer the best solutions for next-generation public transport and travel. We are proud to be part of the Volvo Group, giving us strength to take on our future global challenges.