Finland’s first quantum computer is progressing on schedule. Facilities in Otaniemi, Espoo are ready, first piece of equipment has arrived and installation is in full-swing in the new quantum computing laboratory.

The first phase of the project has now reached its six-month mark and the project is progressing on schedule.

“We are excited to say that the hard work of our teams from VTT and IQM is paying off, and we are on track to demonstrate the first stage of the project – a functioning 5-qubit quantum computer – by the end of 2021,” says Dr. Antti Vasara, CEO of VTT.

“Our growing science and technology requirements demand a completely different approach towards computation, and quantum technologies will play a critical role in shaping this future. This project with VTT is an important milestone in IQM’s journey, to deliver Finland’s first quantum computer and build this quantum ecosystem of industry, research, startups, and academia together with VTT. This quantum computer delivery is also an extremely proud achievement for our IQM team and I’m confident that it is a beginning of a new chapter in the Finnish and European technology history,” said Dr. Jan Goetz, CEO and Co-Founder, IQM Quantum Computers.

The early stages of VTT’s quantum computer project have focused on building and preparing the facilities and infrastructure required by the highly sensitive technology. Sophisticated mechanical, electrical and air-conditioning equipment needed to be installed. Even the screws in the wall and sprinkler system were out of the ordinary. The quantum computer facilities are located in Micronova, a joint research infrastructure of VTT and Aalto University in Otaniemi, Espoo. Now the new quantum laboratory is ready, and support equipment is being moved in and installed.

“This project shows the exceptional quantum know-how that already exists in Finland. Our cooperation with IQM has been productive and in positive spirit from the get-go, and the cryostat that has just arrived in the quantum laboratory has been built by Bluefors, another great Finnish company in the quantum industry and a subcontractor of the project,” Dr. Himadri Majumdar, VTT’s Programme Manager in Quantum says.

In the next six months, work on the 5-qubit computer will continue. The quantum processor is already finalised and the computer is expected to be in use by the end of the year.

“While we are working on the facilities and the hardware, our colleagues in the Quantum Algorithms team are preparing to test fundamental algorithms once the quantum computer is up and running. The aim of this project is not only to build a quantum computer, but to build expertise in both the hardware and the future applications of quantum computing,” Majumdar explains.

Once the 5-qubit computer is up and running, the project will continue in two further phases. The overall goal of the project is to build a 50-qubit device, by 2024.


VTT is a visionary research, development and innovation partner. We drive sustainable growth and tackle the biggest global challenges of our time, and turn them into growth opportunities. We go beyond the obvious to help the society and companies to grow through technological innovations. We have almost 80 years of experience of top-level research and science-based results. VTT is at the sweet spot where innovation and business come together. 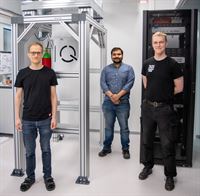