The W-Cube nanosatellite sent a signal on the extremely high frequency range of 75 GHz on August 31st at 16:21 Finnish time. The signal was received successfully by the ground station in Graz, Austria. The satellite, ordered from Finland by the European Space Agency ESA is broadcasting the signal using a radio beacon system developed by VTT Technical Research Centre of Finland and Germany's Fraunhofer IAF. The satellite is now modelling, for the first time ever, how a 75 GHz signal can penetrate the earth's atmosphere. This opens possibilities for the utilisation of the high millimetre wave frequency range in communications satellites in the future.

A new frequency range and additional capacity will be needed already in the next few years when the number of data communication satellites increases and big flocks of satellites such as Starlink operated by SpaceX are deployed.

“Today's lower frequency ranges are divided into narrow bands over which satellites and terrestrial radio links compete. Meanwhile, no bands in the high frequency range have been shared yet among the various applications. A free wide bandwidth enables rapid transfer of information and connections in, for example, the 5G and 6G networks and in remote areas such as Northern Finland. The European Space Agency ESA has a mission to offer these connections and in this way to invest in European competitiveness”, says VTT’s Senior Scientist Jussi Säily.

The penetration through the atmospheric layers by the signal needs to be understood before the frequency range can be utilised. W-Cube's dual frequency radio beacon system sends a 75 GHz signal through the Earth's atmosphere to measuring ground stations in Graz, Austria, and to Espoo. The data from the measurements helps in modelling how weather phenomena in space and in the atmosphere affect the signal propagation and polarization. In addition, W-Cube broadcasts a 37.5 GHz signal, making it possible to compare the information on measurements with previous models with a low frequency range. To save battery power, the beacon signals are only switched on when they can be detected by measuring stations in Europe. At other times the satellite charges its batteries with its solar panels. The satellite orbits the earth approximately once every 1.5 hours and it is visible the earth station (from horizon to horizon) for about 10 minutes at a time.

W-Cube is the first satellite that ESA has ordered from Finland. It is part of ESA's ARTES project, which is coordinated by Joanneum Research in Austria. The Finnish Reaktor Space Lab (RSL) has developed and manufactured W-Cube's satellite platform. VTT has designed, manufactured, and tested the radio beacon system of W-Cube together with Germany's Fraunhofer IAF. The satellite signal is measured at both the main measuring station in Graz as well as a corresponding station at VTT in Espoo, Finland.

“We also hope that this will help Finland get into more sizeable satellite programmes. The project is of great significance in the development of both skills and knowledge, as well as testing facilities. A testing environment for satellites has taken shape in Otaniemi through collaboration involving VTT, Aalto University, and commercial actors. Ensuring the spaceworthiness of the satellite has challenging terrestrial testing in environments including exposure to vacuum, heat, and vibration”, Säily says.

W-Cube was launched into space on 30 June, 2021 from Cape Canaveral, Florida on a SpaceX Falcon 9 space launch vehicle as one of the satellites on the Transporter 2 mission with 88 satellites. W-Cube was placed into its own orbit on 22 July, 2021, and the first contact between the satellite and the RSL ground station was established 22-23 July.

“This was followed by a deployment process in which we made sure that all of the systems were working as planned after the stress of the launch into space. That phase reached its climax today with the broadcast and reception of the 75 GHz signal. After reaching this milestone, the propagation of the signal in the atmosphere under different conditions and at different times of the year will be monitored for at least two years”, says Jarkko Antila, CEO of Reaktor Space Lab.

VTT is a visionary research, development and innovation partner. We drive sustainable growth and tackle the biggest global challenges of our time, and turn them into growth opportunities. We go beyond the obvious to help the society and companies to grow through technological innovations. We have almost 80 years of experience of top-level research and science-based results. VTT is at the sweet spot where innovation and business come together. 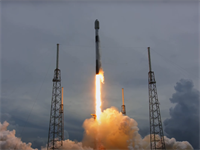