Superconducting chips to scale up quantum computers and boost supercomputers 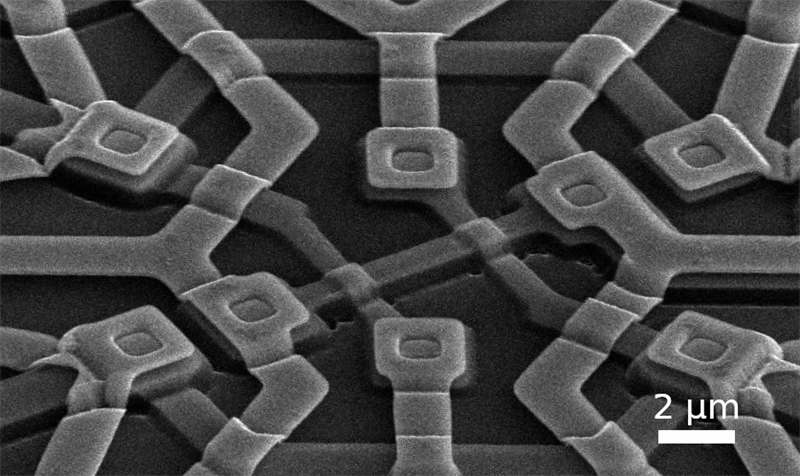 Superconducting processors could become a key ingredient for next generation of supercomputers. First, they could help tackling the major challenge of scaling up quantum computers. Second, they could speed up traditional supercomputers and remarkably cut their power consumption. A multidisciplinary research project led by VTT will tackle one of the main challenges of this solution: data transfer to and from low temperatures that are required for superconductivity.

The processing power of a quantum computer is based on superconducting qubits operated at extremely low temperatures. Qubits are typically controlled by conventional electronics at room temperature, connected through electrical cables. When the number of qubits eventually rises to the required level of hundreds of thousands, the number of control cables will hardly scale to match the number of qubits, without leading to an unbearable heat load and thus spoiling the low temperature of the quantum processor.

One solution is to control the quantum processor with a nearby classical processor. The most promising solution is to utilize the single flux quantum (SFQ) technology, which follows traditional computers in logic but uses superconducting technology instead of semiconductors. Requiring low temperatures, SFQ has been rarely used in traditional computers. This disadvantage however turns into an advantage when used in combination with superconducting quantum computers.

“Our vision is to replace electrical cables with optical fibres and suitable converters, which convert optical signals to electrical signals, and vice versa. Unlike existing solutions, these components must be able to operate at low temperatures. The main goal of our project aCryComm is to develop novel converters and to demonstrate how they can drive and read out a simple SFQ processor. We are exploring an uncharted territory, where choosing the paths most suitable for low temperatures will present both challenges and opportunities,” says Matteo Cherchi, Senior Scientist at VTT, coordinator of the project.VTT is presently developing the Finnish quantum computer in collaboration with the Finnish start-up IQM. Even though the short-term goal of the collaboration is to reach about 50 qubits only, with aCryComm VTT intends to lay the foundation for a long-term development towards much more powerful quantum computers.

Low hanging fruits for conventional supercomputers
Besides quantum computers, conventional supercomputers can benefit even sooner from the development of optical connections for SFQ technology.In a typical supercomputer, or actually any laptop or smartphone, graphic processing units (GPU) support the central processing unit (CPU) in 3D rendering and similar computational tasks. GPUs are particularly suitable for vector and matrix calculations that are at the core of various scientific calculations.

“CSC, the Finnish IT Centre for Science will be soon home to the European supercomputer LUMI, one of the fastest supercomputers in the world, with a computing power equivalent to 1.5 million laptops and power consumption of about 200 MW, which would cover the needs of several tens of thousands of homes. The aCryComm project can contribute to the next generation of supercomputers by speeding them up, while significantly lowering the power consumption. Remarkably, this new technology would be all developed and made in the EU, unlike most of the hardware of present supercomputers,” Cherchi says.

Multidisciplinary experts get together
The 3-year EU project, aCryComm is coordinated by VTT. The vision of the project owes to the close in-house cooperation of experts on topics such as photonics, superconducting devices, metrology and telecommunications.Being multidisciplinary the VTT team was able to identify the best experts and most suitable international partners for the project, these being Tampere University in Finland, KTH Royal Institute of Technology in Sweden, ETH Zürich in Switzerland and PTB, the national metrology institute of Germany, and corporate partners Single Quantum in the Netherlands and Polariton Technologies in Switzerland.

VTT is a visionary research, development and innovation partner. We drive sustainable growth and tackle the biggest global challenges of our time, and turn them into growth opportunities. We go beyond the obvious to help the society and companies to grow through technological innovations. We have almost 80 years of experience of top-level research and science-based results. VTT is at the sweet spot where innovation and business come together.