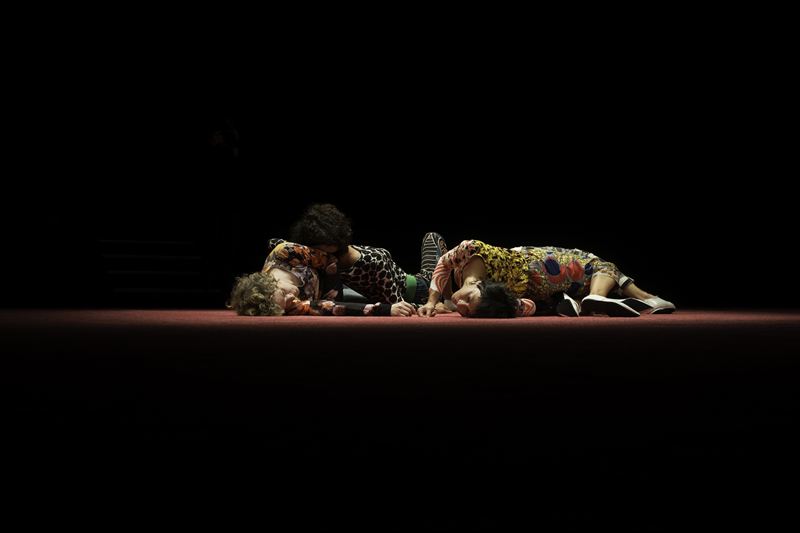 The exhibition SculptureMotion brings together six Swedish, Nordic, and international artists in an exhibition that includes moving image and performance. The artists begin with movement – adding, being, reproducing movement, the memory of movement, and emphasizing the dual meaning of the word “movement”: active physical movement, but also movement as mobilization. One of the world’s foremost choreographers, William Forsythe, presents his Choreographic Objects in Sweden for the first time. The exhibition program has included a Walk & Talk with William Forsythe, a performance weekend with the artist collective Mammalian Diving Reflex as well as a performance by Sonia Khurana. August 19 and 20 choreographer Maria Hassabi’s outdoor performance STAGED? (2016) – undressed will take place in the sculpture park at the Wanås Foundation.

Maria Hassabi’s intent to stillness and sustained motion is pursued in her ongoing work as she examines the tension between the human form and the artistic object. The bodies oscillate between dance and sculpture, subject and object, live body and still image. The dancers juxtapose protracted movement with prolonged stillness, giving the audience time to consider them as images, abstract or embedded with multiple references. Staging (2017) that together with Staged (2016) forms a diptych, is being presented this year at documenta 14 in Kassel.

Rachel Haidu writes about the dancer’s movement in the Documenta 14: Daybook, remarking that ”Each trembling reinvents the very notion we carry of shape, no longer a static picture-integer-like, symbolic template – but a mobile and powerful force.”

Maria Hassabi (born 1973 in Cyprus) is a New York-based artist and choreographer. Over the years she has developed a distinct choreographic practice involved with the relation of the body to the image, defined by sculptural physicality and extended duration. Her works draw their strength from the tension between the human subject and the artistic object, the dancer as a performer and as a physical entity. Her works include PLASTIC (2015); PREMIERE (2013); INTERMISSION (2013); Counter-Relief (2013); SHOW (2011); Robert and Maria (2019); SoloShow (2009); Solo (2009); GLORIA (2007); Still Smoking (2006); Dead is Dead (2004); LIGHTS (2001). She has also has also created several short-form pieces, installations including A Dance without Dance (2015); PLASTIC (2015); Hassabi’s works are presented in theaters, festivals, museums, galleries and public-spaces worldwide. In the US in venues such as Hammer Museum (Los Angeles); The Kitchen (New York); Museum of Contemporary Art Chicago (Chicago); CCS Bard Galleries at Bard College (Hudson, NY); Danspace Project (NY); PS122 (NY); Portland Institute for Contemporary Art TBA Festival (Oregon); Ballroom Marfa (Texas); Dance Theater Workshop (NY); PS1 MoMA (NY); and have been included in festivals such as Performa ’09 and Performa 13’; Fi:af’s Crossing the Line Festival in 2009 and 2011, and LMCC’s River to River Festival in 2012 and 2014.

About Live Art at Wanås Konst

In 2016, Wanås Konst began actively making dance and performance a part of its program. Not just a one-time event, but a long-term investment in “live art,” art that must be experienced in the moment and requires your presence then and there. This means more chances to take part in dance and performance at Wanås. This year we dive into the specific effects of dance and choreography using the sculpture park and the outlying areas as the grounds for a series of live art encounters and experiments in the form of performances and workshops. The artists dialogue with the existing

collection and nature. They play and tease, and deepen our connection to visitors of all ages. They change the way we experience our bodies in relation to time and space.

In STAGED? (2016) – undressed, four performers in abstractly patterned clothing are entangled in a slowly metamorphosing living sculpture. In its “undressed” iteration presented at Wanås, away from its theatrical setting, the work invites the context of the sculpture park to influence its form and become its new stage.

The program is part of the exhibition SculptureMotion and is curated in collaboration with Rachel Tess, associate curator dance. It is made possible with support from the Swedish Arts Council and Kultur Skåne.

How does a choreographer work? Why does dance look how it does? Those of you who are usually sitting in the audience, wondering why it looks how it does, now have the chance to spend a day with choreographer Björn Säfsten and take a physical leap into contemporary dance. Test different working methods, examine movements, and get to know the ideas behind Säfsten’s choreographic work. No previous experience is necessary. Limited number of participants to sign up contact albin@wanaskonst.se

Revisit 1987 – 30 Years of Art Exhibitions at Wanås  1987 marked the first art exhibition at Wanås, and now, 30 years later, there is a permanent collection comprised of 70 artworks. But what did the first exhibition look like? Revisit 1987 – 30 Years of Art Exhibitions at Wanås is an exhibition about an exhibition that through an in-depth look at archival material such as photographs, films, turns back the time to 1987.  Curator: Filippa Forsberg
Exhibition Period: April 14 – September 24, 2017.

In 2017 the Art Gallery will extend its hours to include exhibitions throughout the winter. In the fall and winter we will exhibit Land Tax by artist Jennifer Forsberg (SE) and will have activities in connection to Bästa Biennalen for children, youth, and other curious visitors.

Bästa Biennalen and fall break – on the theme of Chaos
October 28 – November 5, 2017, open daily 11am – 3pm
Open workshop inspired by Jennifer Forsberg’s exhibition Land Tax and clay. For fall break we build a kiln and let fire paint the works we sculpt from clay. The firing will take several days and works can not be taken home the day of the workshop. Instead we will gather all of the works created by participants and create an exhibition. Each participant is welcome to pick-up their artwork after the fall break.

Included in the entry fee, free for participants 18 years of age and under.

Wanås Konst – Center for Art and Education, presents and communicates contemporary art that challenges and redefines society, working outside in the landscape around Wanås in Skåne, southern Sweden. The permanent collection in the sculpture park is complemented with a program of temporary exhibitions, both outdoors and in the Art Gallery, and events such as guided tours, artists’ talks, performances and workshops engaging a wide audience. Wanås Konst produces site-specific international art and learning in an innovative and accessible way.

Wanås Konst is run by The Wanås Foundation, a non-profit foundation created in 1994, in Östra Göinge municipality, in the South of Sweden, 1.5 h from Copenhagen, Denmark. Founding Director Marika Wachtmeister initiated the art projects at Wanås in 1987. Since 2011 the foundation is led by Elisabeth Millqvist and Mattias Givell. Wanås Konst is part self-financed, part supported by state, regional and municipal funding, as well as by private foundations and sponsors.

Wanås is a place in the world where art, nature and history meet. Wanås consist of a medieval castle, an organic farm, a scenic sculpture park and an art gallery in southern Sweden as well as the newly opened Wanås Restaurant Hotel. Wanås Konst is part of European Land + Art Network (ELAN) and Wanås is a Long Run Destination – a leader in sustainable development within the tourism industry, community development and cultural management.