Per Kirkeby at Wanås Konst – The Wanas Foundation in 2016

In 2016 Revisit – Per Kirkeby will be shown at Wanås. The exhibition of sculptures and paintings is based on the artist’s large brick sculpture that is part of the permanent collection in the sculpture park. Kirkeby is one of Denmark’s most acclaimed artists with exhibitions and artworks all over the world. This spring he is presenting a comprehensive exhibition at Gl. STRAND in Copenhagen. Revisit – Per Kirkeby at Wanås opens on May 15 at the same time as the exhibitions with the Swedish artist duo Nathalie Djurberg & Hans Berg and the Colombian Rafael Gomezbarros. The exhibition period will be from May 15 to November 6, 2016. 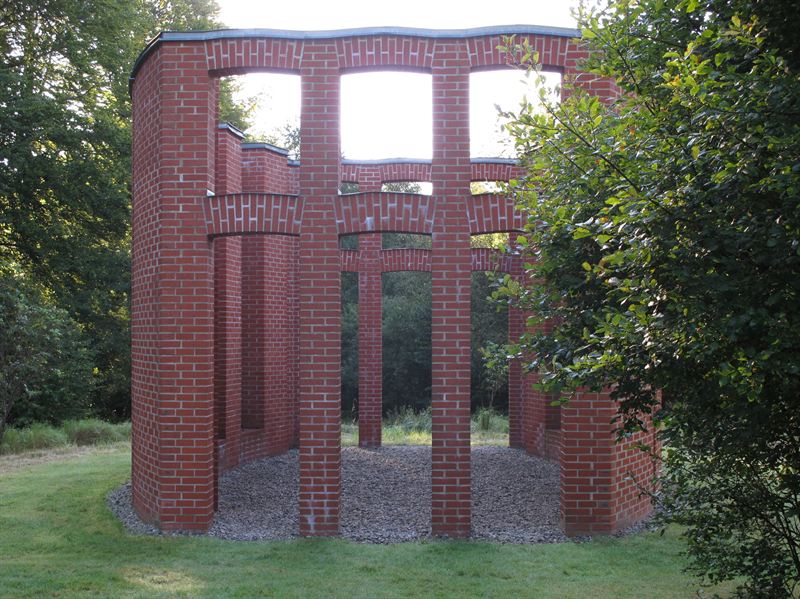 Per Kirkeby’s show is part of Revisit, the series of exhibitions that activate the permanent collection in the sculpture park at the Wanås Foundation. Wanås, the eponymous large brick sculpture that the artist built in the park in 1994, is the point of departure for this particular exhibition that also shows other aspects of Kirkeby’s multifaceted practice including painting, sculpture, and graphics. The red brick is juxtaposed with black paintings, large-scale works with intimate bronze sculptures and the mundane shape of a brick with surfaces that bear the distinct mark of the human hand. Sketches from 1993 are joined by artworks from the 2000s in an exhibition that provides new insight into the work of one of the most acclaimed artists of the Nordic countries.

When creating Wanås, the permanent installation in the sculpture park, Kirkeby wanted to work with a space that was screened off on both sides but invited one to pass through. He chose to place the work in a glade, not in the forest, with a view towards Wanås castle and in relation to the old stable blocks and barns surrounding it. The work finds itself in the intersection between sculpture and architecture and was made in answer to the Northern European brick architecture tradition. Wanås, whose buildings are examples of such architecture, lies in what is sometimes called the brick belt and one of the oldest brick churches in the Nordic region, consecrated in 1191, can be found in the vicinity.

A catalogue will be published in connection with the exhibition. Per Kirkeby was born in Copenhagen in 1938 and has long had a strong presence on the international art scene, with his work featuring at the Venice Biennale and at documenta, as well as at Tate Modern. Apart from sculpture and painting, his artistic practice also encompasses graphics and poetry. In the spring of 2016 he is presenting a large solo exhibition, Avantgardens Blå (The Blue of the Avant-garde), at the art association GL STRAND in Copenhagen – an exhibition that was recently shown at the Danish contemporary art museum HEART Herning.

The Sculpture Park with the collection is open daily all year round.

Winter season until May 15, 2016: The Café, the Art Gallery and the indoor installations are closed.

Wanås Konst – Center for Art and Education, presents and communicates contemporary art that challenges and redefines society. Wanås Konst produces site-specific international art and learning in an innovative and available way for the many. Wanås is a place in the world where art, nature and history meet. Wanås consist of a medieval castle, an organic farm, a scenic sculpture park and an art gallery in southern Sweden. Wanås Restaurant Hotel opens on the premises Fall 2016.