Can I show you my sculpture? In July and August, together with visitors to the sculpture park, Xavier Le Roy, Scarlet Yu and the Still Untitled team explore the concept of sculpture within the context of Still Untitled and spread it through encounters in the park and beyond. Still Untitled is sculptures that are embodied and presented by people to people. Visitors are invited to participate in one-day workshops that examine the relationship between live art and sculpture relative to time and public space. Anyone is welcome to sign up for the workshop and no previous knowledge or experience are required. Le Roy is known for his groundbreaking hybrid of choreography and visual art that transforms the traditional exhibition format; Le Roy and Yu have worked together in collaboration with the Venice Biennale in 2015 and most recently in conjunction with Skulptur Projekte Münster in 2017. Since 2014, Wanås Konst has made supporting live art a long-term priority. The program has been developed by Wanås Konst’s Affiliated Curator Rachel Tess. 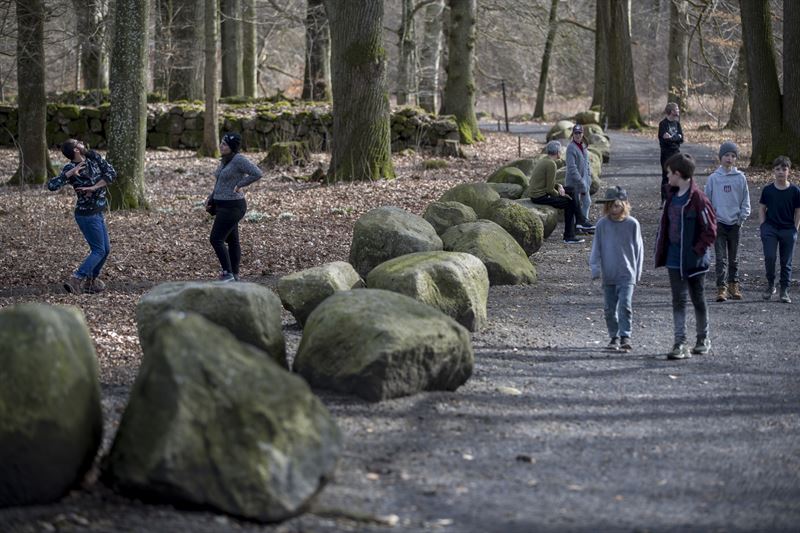 Participate in a one-day workshop

I am interested in this moment when you get the sense that you have made time rather then spent it or made it productive. It is not given. It is something else than consuming time or being consumed by it. Xavier Le Roy

Still Untitled was developed for Skulptur Projekte Münster 2017. Through guidance and conversations, the participants develop sculptures that are embodied and presented by people for people. The sculptures are shared with whomever, wherever, whenever—within and beyond the exhibition. From July 20 and to August 5, 2018, Le Roy, Yu, and the team for Still Untitled, continue the project in the sculpture park Wanås Konst, where they invite visitors to participate in a one-day workshop. Elisabeth Millqvist, artistic director of Wanås Konst, describes: “Dissolving the role of a viewer or a work of art you explore sculpture through talking, thinking, and testing, or you might, as a visitor in the park, encounter someone who wants to share by asking the question, ‘Can I show you my sculpture?’.”

Sign up: The workshops are open to everyone and require no previous knowledge or experience. To sign up, please send and e-mail to: stilluntitled@wanaskonst.se or RSVP in person in the Art Gallery. Participation in Still Untitled is included in the admission fee to the sculpture park, and all participants receive a two-day pass that can be used at any time in 2018.

About Xavier Le Roy and Scarlet Yu
Xavier Le Roy and Scarlet Yu have worked together since 2014 in projects that include: Retrospective in Singapore (2014), Beirut (2015), and Taipei (2016), Provisory Title for the 56th Venice Biennale (2015), Temporary Title, 2015 for Kaldor Public Art Projects, Sydney (2015) and Centre Pompidou Paris (2016) and for The Unfaithful Replica at CA2M, Madrid (2016). Still Untitled is a work they developed for Skulptur Projekt Münster 2017 in Germany in which they examine questions of time and public spaces and work with the concept of embodiment and sculpture.

Xavier Le Roy (born 1963, lives in Berlin) has a PhD in molecular biology and has worked as a choreographer since 1991. In 2018, he became a professor of Theater at Giessen University (Germany). He explores different modes of production and the reception of movements as he questions the divisions that structure our world: human/non-human, nature/culture, actor/viewer, object/subject, etc. By oscillating between solo and ensemble works and examining different public situations and working relationships, Le Roy investigates how every individual and every group is a “product of circumstances” at the same time as they produce their circumstances. His works include the solo works Self Unfinished (1998), Product of Circumstances (1999), Le Sacre du Printemps (2007) and Sans Titre (2014), group projects Projekt (2003) and low pieces (2011); and works for exhibition sites, among them Retrospective (2012).

Scarlet Yu (born 1978, lives in Berlin) worked as a rehearsal director and dancer at Arts Fission Dance Company in Singapore from 2000 to 2012 and earned an MFA in dance at the Hong Kong Academy of Performing Arts in 2015. Using autobiographical material, her works create choreographed one-on-one situations that deal with memory and the concept of the body as an archive. Besides several collaborations, her own works include The Act of Memory på Skyhigh Creative Partners (2014, Hong Kong), The Act of Passing at Singapore National Design Centre (2015), Read MEmory at WINGS Platform (2015, Hong Kong) and A Performance at Oil Street (2017, Hong Kong).

Wanås Konst – Center for Art & Learning, presents and communicates contemporary art that challenges and redefines society, working outside in the landscape around Wanås in Skåne, southern Sweden. The permanent collection in the sculpture park is complemented with a program of temporary exhibitions, both outdoors and in the Art Gallery, and events such as guided tours, artists’ talks, performances and workshops engaging a wide audience. Wanås Konst produces site-specific international art and learning in an innovative and accessible way.

Wanås Konst is run by The Wanås Foundation, a non-profit foundation created in 1994, in Östra Göinge municipality, in the South of Sweden, 1.5 h from Copenhagen, Denmark. Founding Director Marika Wachtmeister initiated the art projects at Wanås in 1987. Since 2011 the foundation is led by Elisabeth Millqvist and Mattias Givell. Wanås Konst is part self financed, part supported by state, regional and municipal funding, as well as by private foundations and sponsors.

Wanås is a place in the world where art, nature and history meet. Wanås consist of a medieval castle, an organic farm, a scenic sculpture park and an art center in southern Sweden as well as the newly opened Wanås Restaurant Hotel. Wanås Konst is part of European Land + Art Network (ELAN) and Wanås is a Long Run Destination – a leader in sustainable development within the tourism industry, community development and cultural management. Read more at www.wanaskonst.se