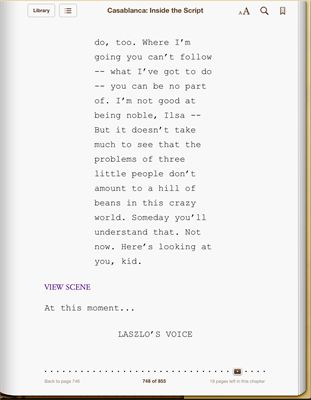 MOVIE FANS CAN NOW OWN DIGITAL VERSIONS OF SCRIPTS FROM ICONIC FILMS INCLUDING “CASABLANCA,” “BEN-HUR,” “AN AMERICAN IN PARIS”AND “NORTH BY NORTHWEST” COMPLETE WITH RARE NOTES, PUBLICITY STILLS AND OTHER INTERACTIVE ASSETS

FIRST “INSIDE THE SCRIPT” TITLES NOW AVAILABLE ON iBOOKSTORE, KINDLE AND NOOK®

BURBANK, CALIF., April 30, 2012 – Warner Bros. Digital Distribution (WBDD) today announced the launch of “Inside the Script” – a digital publishing initiative that gives movie fans an innovative new way to go deep inside their favorite films. Available now for iBookstore, Kindle and NOOK by Barnes & Noble, “Inside the Script” is a series of highly illustrated eBooks that contain the film’s actual shooting script, rare materials from the Warner Bros. Corporate Archive and much more. The first series of “Inside the Script” titles are based on timeless, cinematic treasures including “Casablanca,” “Ben-Hur,” “An American in Paris” and “North by Northwest.”

“Inside the Script” offers movie fans an all-access pass to go behind-the-scenes of the films they know and love. Every “Inside the Script” title includes the film’s complete shooting script in a customizable eBook format; dozens of chapters about the script and the film that detail the movie’s development; rare historical documents such as production notes, storyboards and candid photos; and an interactive image gallery of costumes, on-set stills, movie posters, set designs and behind-the-scenes photos.

“People love movies because of the stories they tell,” said Thomas Gewecke, President of Warner Bros. Digital Distribution. “Now we can give fans rarely seen details of how these stories came together and take their enjoyment of films to a whole new level.”

Highlighted elements from “Inside the Script” titles include:

“Inside the Script” releases are now available for iBookstore, Kindle and NOOK for $9.99 per title. For more information visit www.facebook.com/insidethescript. 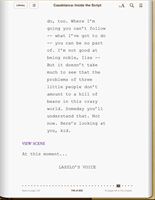 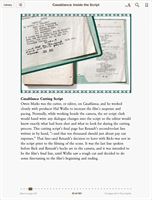