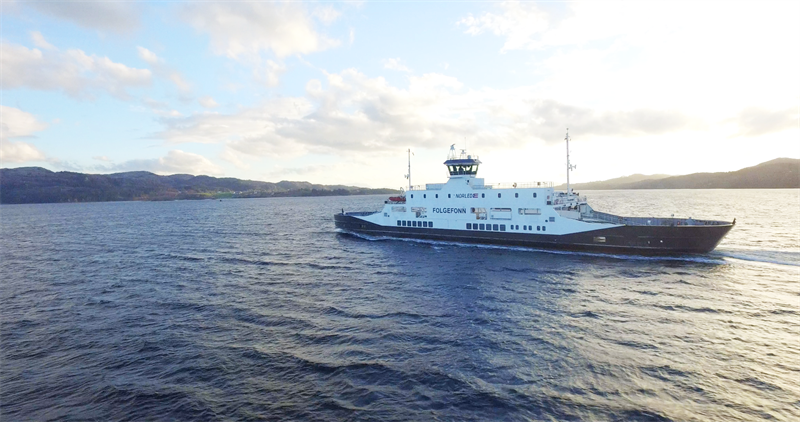 The technology group Wärtsilä has successfully completed a further round of test procedures of its automated dock-to-dock solution. In an unprecedented operation, in the presence of the Norwegian Maritime Authority (NMA), the system was further tested on the ferry ‘Folgefonn’, this time for full dock-to-dock capability, with the autonomous operation being utilised uninterrupted for the entire route, visiting all three ports serviced by the ship.

“This represents a huge step forward in validating automated shipping solutions, and an important progression within our Smart Marine programme. This emphasises once again Wärtsilä’s recognised position as the global technology leader in marine innovations. We continue to lead the way in developing the ‘intelligent’ products and systems needed to move the marine industry towards a new era of super-high efficiency, safety, and environmental sustainability,” says Joonas Makkonen, Vice President, Voyage Solutions, Wärtsilä.

The success of these latest tests cannot be underestimated. Once the operator selected the next destination berth, the operation was started by simply selecting “Sail”, which authorises the autonomous controller to take control of the vessel. The ferry was able to leave the dock, manoeuvre out of the harbour, sail to the next port of call, manoeuvre through the harbour entrance, and dock alongside the terminal – all without human intervention. It is believed to be the first ever attempt at fully automated dock-to-dock operation, in complete hands-off mode, for a vessel of this size.

Navigation of the vessel is controlled through the use of a series of tracks and waypoints, which guide the ship to the next destination. The autonomous controller, which is based on Wärtsilä’s existing Dynamic Positioning system, controls the vessel’s speed, position on the pre-defined track, and heading. GNSS is used as the primary sensor, while a Wärtsilä Guidance Marine CyScan AS is being tested as a secondary position sensor for the approach to the berth.

“We were on site for three days as witnesses to these tests; the first full scale demonstration towards an autonomous operation of a vessel that we have seen. It was, to say the least, very impressive. There is no doubt that such technology can eventually increase the safety and overall efficiency of the docking and undocking operations for ships. Of course, further development work is still ongoing, but I am impressed by how stable the system already is at this stage,” says Nils Haktor Bua, Project Manager at NMA.

The 85 metres long ‘Folgefonn’ is owned by Norwegian ferry operator Norled. It was used also for the initial testing of the Wärtsilä autodocking solution, which took place in the early part of 2018. The vessel is also equipped with hybrid propulsion with wireless shore connection capable of fully electric operation, and features numerous other Wärtsilä innovations, including its wireless inductive battery charging solution and energy storage systems.

“We are pleased to cooperate with Wärtsilä in this exciting project. A fully autonomous dock-to-dock solution will provide us with considerable value-adding benefits in terms of better efficiency, greater safety, lower fuel consumption and, therefore, reduced exhaust emissions. We see the Wärtsilä solution as being a key support to the crew, enabling them to operate the vessel as effectively as possible,” added Sigbjørn Myrvang, Technical Manager at Norled.

Innovation Norway, an investment fund, has provided grants to both Wärtsilä and Norled for the testing of the auto-docking technology.

Image caption: The ‘Folgefonn’ was operated autonomously for its entire route from dock-to-dock with the Wärtsilä automated dock-to-dock solution.

Wärtsilä in brief:
Wärtsilä is a global leader in smart technologies and complete lifecycle solutions for the marine and energy markets. By emphasising sustainable innovation, total efficiency and data analytics, Wärtsilä maximises the environmental and economic performance of the vessels and power plants of its customers. In 2017, Wärtsilä’s net sales totalled EUR 4.9 billion with approximately 18,000 employees. The company has operations in over 200 locations in more than 80 countries around the world. Wärtsilä is listed on Nasdaq Helsinki.
www.wartsila.com