Towaga, the latest game from a Swiss startup that aims to challenge the little Italian plumber 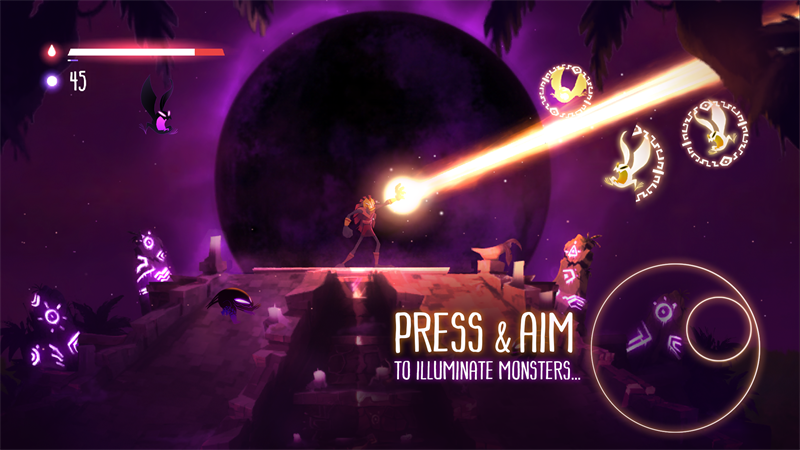 *Japanese and Korean press releases are available as PDF downloads

Available to download from January 11th 2017 on the App Store and Google Play at a cost of 3 CHF (No adverts or in-app purchasing), Towaga, the new, 100% Swiss-made game by Sunnyside games with backing from Switzerland’s crowdfunding community, has ambitions on a grand scale, aiming for a million downloads in short order, despite an ultra-competitive market. Sunnyside Games is pinning its hopes on a custom-developed light rendering engine, a soundtrack that adapts to the player’s actions, and the studio’s previous successes in the mobile market with Anshar Wars 2 and The Firm, all of which could enable Chimù to do battle with the Goliaths of the industry.

Lausanne, Switzerland, January 11th 2017: Towaga is a challenging and exciting 2D action/adventure game developed by the young, Lausanne-based startup, Sunnyside Games. They’ve been around the block before: Anshar II for the Gear VR and Oculus Rift was one of 2016’s best sellers, while The Firm for iOS sold over half a million copies.

You play the part of Chimù, a powerful, masked character at the top of the legendary Towaga Tower, where you have to complete a dark and historic ritual that leads to the discovery of ancient worlds while you face up to monsters who are starved of light.

Armed with divine powers, especially a powerful beam of light, you must survive, perform exorcisms and combat the hordes of monsters while trying to complete the five challenges that will reveal the ultimate mystery, hidden behind the door of the dead.

The process of developing Towaga was made possible thanks to Switzerland’s crowdfunding community, which raised the campaign’s profile and resulted in it receiving 186% of its funding target. Since then, Sunnyside Games has developed and implemented several games and has focused its efforts on creating its own, 2D cartoon rendering engine to recreate an immersive visual experience that resembles a traditional cartoon.

The soundtrack also received special attention, as it was created specifically for the project using the Wwise audio engine so that it could adapt and evolve dynamically, depending on what the player does on the screen.  In summary, this is an adventure to be experienced with an audio headset for complete immersion.

Sunnyside Games will offer a number of free updates over the coming months, based on feedback from the community. This is a concept that is close to the heart of the Lausanne-based startup, which always aims to offer an experienced that is designed for gamers, by gamers.

About Sunnyside Games
Sunnyside Games is a young, Lausanne-based startup that was founded in 2013, and which specialises in developing mobile and VR games. Sunnyside Games defines itself, first and foremost, as a mutually supportive, flexible team that is highly motivated to achieve its goals, which include the creation of fun, uninhibited and rewarding experiences, and sharing a worldview that has its roots in the world of animation with the gaming community.

–      Unique graphics that are comparable with an animated cartoon

–      Challenges that are successfully met

–      A system of free updates available over the coming months

The game is available in English and will very shortly be available in several additional languages, including French, Russian, and Japanese

What others have said about us

Extract: “The game, which has won this small, Lausanne-based company worldwide acclaim, is called ‘The Firm…”

Extract: “The Lausanne-based software publisher, Sunnyside Games, has enjoyed a breakthrough on the international scene…”