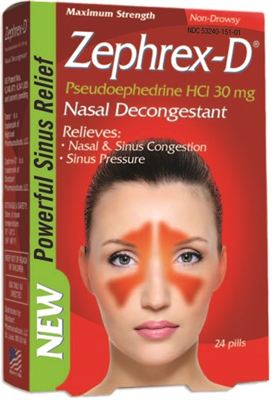 ST. LOUIS, September 5, 2013 -- The nation’s foremost decongestant, pseudoephedrine, a favorite of sinus-suffering consumers and meth-making criminals, is now available nationally in a product designed specifically for consumers and against criminals.  Zephrex-D® cannot be used to make methamphetamine (meth) with the widespread and dangerous “one pot shake and bake” process, according to testing and statements from narcotics officers.

“Zephrex-D® provides the unsurpassed congestion relief consumers expect from pseudoephedrine. It also provides peace of mind.  Anyone who chooses Zephrex-D® will be doing the right thing in helping keep their streets and communities safe for their families and kids,” said Paul Hemings, Vice President and General Manager at Westport Pharmaceuticals.  “We have a great product for legitimate sinus and cold sufferers, but meth-making criminals will have to look elsewhere,” added Hemings.

Hemings noted that more than 15,000 pharmacies, including major national retail pharmacy chains, have already begun stocking Zephrex-D® in preparation for the onset of cough, cold and flu season.  More stores will be added in the weeks ahead.  Consumers can visit http://zephrex-d.com/where-to-buy/ for locations near them.  “We have already launched a comprehensive pharmacist education program and will be mounting an ambitious consumer campaign in the fourth quarter,” said Hemings.

During eight months of Zephrex-D® test marketing in Missouri, the nation’s top meth lab seizure state, Zephrex-D® was not found in any seizures, according to the Missouri Narcotics Officers Association.  The test marketing began in December 2012, and involved more than 300 stores, including major pharmacy and retail chains.

Eighty seven percent of all meth labs use the “one pot shake and bake” process, according to a 2013 Government Accountability Office report. Meth labs using the “one pot shake and bake” process cause the vast majority of meth-related challenges for communities.  Highly portable, these meth labs have been found throughout communities, as well as in homes, cars, hotel rooms, and even public rest rooms. In Missouri, the number of clandestine and mobile meth lab seizures increased by more than 50% over the past four years.

Westport Pharmaceuticals is reaching out to local law enforcement and narcotics officers’ associations nationwide.  It is offering to supply Zephrex-D® at no cost so that they can witness the results firsthand by replicating and testing  – with appropriate safeguards -- the “one pot shake and bake” process conducted by the Missouri Narcotics Officers Association using Zephrex-D®.

For other tried and true methods used by today’s meth makers, independent testing of Zephrex-D® has found that the traditional two-step (extraction/conversion) process converted less than one half of one percent (0.5%) of the pseudoephedrine into meth. When more advanced extraction/conversion laboratory methods were applied to Zephrex-D®, the yield was less than 2.0%.

“The extremely small yields, locked in the binding ingredients, render meth making with Zephrex-D an impractical, money-losing proposition for meth lab operators. We’re not saying it is absolutely impossible to make meth with Zephrex-D®, but it won’t work with the “one-pot shake and bake” method.  Other traditional, two-step methods that meth cooks have used for years, result in extreme cost, trouble and frustration only to make a very tiny amount of meth,” said Hemings.

“We are confident that further testing, closely mimicking the processes known to be currently employed by clandestine laboratory operators, will produce similar results, confirming that Zephrex-D can deter today’s domestic meth-making processes.  However, given criminal resourcefulness, it is imperative for us to collaborate with federal, state and local law enforcement on identifying opportunities for constant improvement.   As we continue our meth resistance research and innovation, we must always stay a few steps ahead of the criminals,” said Hemings.

The meth resistant properties of Zephrex-D® are provided by Tarex®, an innovative, patented technology that delivers pharmaceuticals in a locking formulation that provides 100% pseudoephedrine relief while deterring misuse of the medication.

All Americans are impacted by the meth epidemic. Meth abuse costs US taxpayers approximately $23.4 billion annually. These costs include, but are not limited to: law enforcement, uninsured burn victims, incarceration and rehabilitation of addicts, foster care for dependents, toxic waste cleanup and secondary meth crimes. More importantly, these costs are increasing, not diminishing.

Westport Pharmaceuticals, LLC is a privately-held specialty pharmaceutical company located in St. Louis, MO.  Using an innovative, tamper-resistant technology, Westport delivers pharmaceuticals in a format that maintains patient efficacy while deterring misuse of a medication. This drug delivery system provides a new and unconventional approach to combat drug misuse and has the potential to ease purchase restrictions on legitimate consumers.  Zephrex-D®, a 30 mg pseudoephedrine pill, is Westport’s first commercially available product.  For more information on Zephrex-D®visit http://www.zephrex-d.com,  http://www.twitter.com/zephrexd, or http://www.facebook.com/zephrex-d.