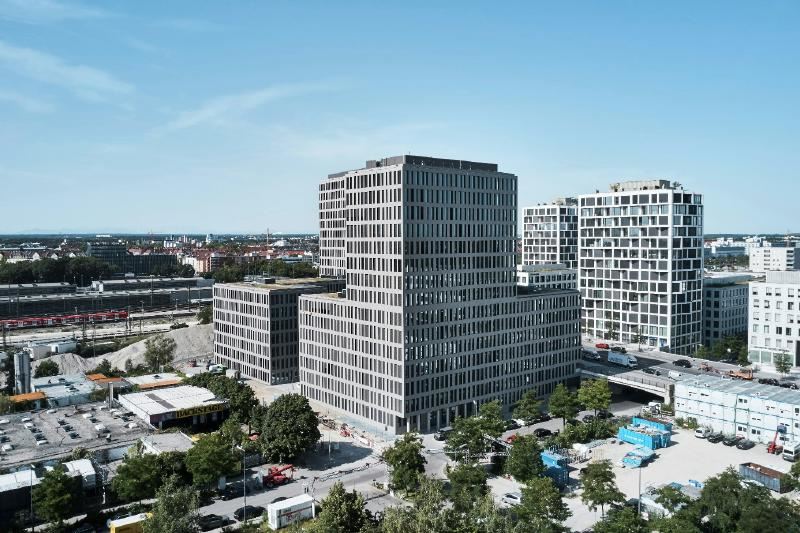 In the suburb of Neuhausen-Nymphenburg, a 7,300 m2 former industrial site (MK8) has been transformed to accommodate forward-looking residential and commercial properties – the new Am Hirschgarten district. And the most striking buildings in this urban planning district belong to the Kap West development, designed by Wiel Arets Architekten. This up-to-date office complex has set new standards for architectural design and the quality of both the location and its high quality indoor spaces. The two horseshoe-shaped main buildings are both topped by distinctive towers. The slightly taller 60 m south tower boasts an imposing overhang, cantilevered 18 m above the ground. This landmark, counter-rotated over the main building below, can be seen for miles around. The visionary concept of flexible, modern, futureproof working in an urban environment comes complete with a campus-like layout of open spaces, including green courtyards and roofs.

WICONA delivers intelligent high-tech aluminium building systems, technical expertise for international building projects and all-around service for the creativity of architects and fabricators. WICONA is a part of the Norwegian Hydro group, which also owns the Technal, Domal, SAPA and Askey brands.

Hydro is a fully integrated aluminium company with 35,000 employees in 40 countries on all continents, combining local expertise, worldwide reach and unmatched capabilities in R&D. In addition to production of primary aluminium, rolled and extruded products and recycling, Hydro also extracts bauxite, refines alumina and generates energy to be the only 360° company of the global aluminium industry.