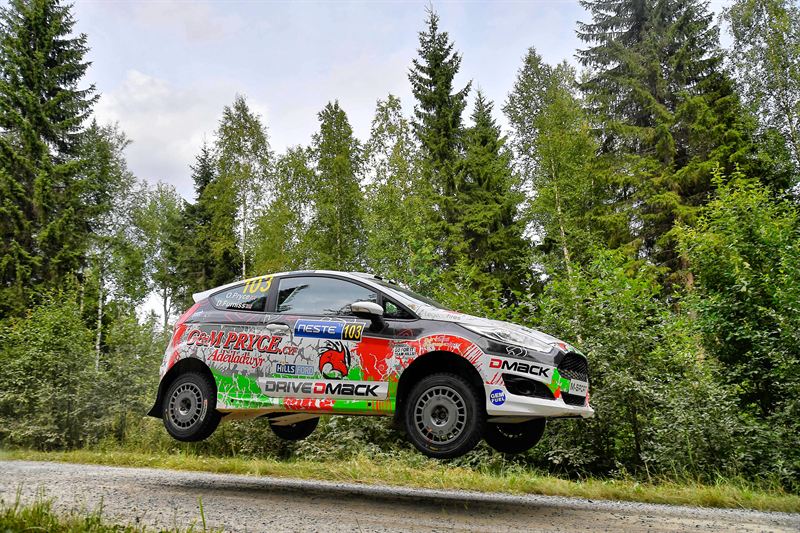 Winning two of three days of Rally Finland, Osian Pryce ended the latest round of the Drive DMACK Fiesta Trophy with an unbeaten run of four scratch times today.

Osian and co-driver Dale Furniss blitzed the opposition in their Ford Fiesta R2T today, backing up their outstanding, DDFT-leading pace on their first leg.

Osian’s hopes of a second win from three rallies were dashed when the Fiesta slid off the road and out of the lead on SS14 on Saturday morning. Despite missing the win (and two more DDFT prize drives to add to the two Osian scored in Poland last time out), Pryce made a huge impression on an event where experience is supposed to count for everything.

Osian said: “This might sound a bit strange, given that we missed winning another two prize drives for next year, but I’m absolutely delighted. Honestly. Everybody talks about Finland as the place to come and show your pace – but at the same time, it’s a place where experts say it’s impossible to come and be on the pace first time out. There were a good few folk who told me not to expect so much from my first time in Finland, it’s really nice to change that way of thinking.

“I did a lot of homework on this rally, talked to as many people as I could and watched more YouTube coverage than for any other event. The person who inspired me here was Richard Burns. He came to this rally for the first time in 1998 and finished fifth overall. The following year, he almost won it. Being a fellow Brit, Richard’s always been a huge hero of mine and I definitely try to follow his neat, tidy, efficient style of driving.

“Richard showed it’s possible to come here with no experience and do really well. Of course, I’m not comparing what I’ve done with him, but I used his example and I feel I’ve shown what I can do as a Finland rookie. Leading a Finn in Finland at the end of day one was a special moment. As were all of the fastest times.

“Yes, I wanted the win, yes I wanted the two more drives next season, but most of all I wanted to face Finland down and I feel I’ve done that a little bit in my own way. There was a real nervousness for Dale and I coming here; it was such a step into the unknown: would we have the speed to compete?

“Turns out we would!”

Osian’s day two roll not only forced him out of contention for a second win in three DDFT starts, but it also brought the M-Sport hammers out.

An afternoon panel-beating was time well spent, however.

Osian said: “I want to thank the M-Sport boys again for the effort they put in to getting the car sorted yesterday (Saturday). The car was absolutely perfect for us today and that’s thanks to them.

“It’s also right that we say a big thanks to DMACK for the perfect tyres this week. We had no issues whatsoever and the tyres were consistent in performance and wear on all of the stages.

“It was really important for me to be back in the car again before we go to Germany. It’s that getting back on the bike thing. The first asphalt event is just two weeks away now – I can’t wait!”

SS21: fastest (7th in DDFT) cautious run, first time back in the car after roll