Osian and co-driver Dale Furniss made the best possible start to the day with fastest time on the Gorklo stage. Run just outside the host town of Mikołajki, the eight-mile test had the look of a loosener. Loosener or not, Osian leap-frogged his way from fourth to first with a scorching and unbeatable time through SS2. The first stage was run at the superspecial close to service on Thursday night.

The crews moved north to run alongside the Russian border in stage three, where Pryce’s THORUtilities and G&M Pryce-backed DS 3 was fastest again. The hat-trick of Junior scratch times came on SS4, where Osian moved 6.6 seconds clear of the chasing pack.

The Machynlleth driver’s hard work was undone in SS5 – the day’s longest stage at 24.30 miles – close to the Lithuanian border, when he caught a slower car ahead of him. Forced to run in the dust for six miles, Pryce was unable to see much beyond the end of the bonnet. He throttled back and drove sensibly to the finish.

”Of course it was disappointing to be stuck in somebody’s dust,” Osian said, while changing tyres at lunchtime in the border town of Gołdap. “But the key was to stay calm. We’d been sensible all morning and I was determined not to throw all the good work away in one rash move.”

Sensible and calm words from the 22-year-old who had his 6.6-second lead overturned; he would start the afternoon third in the Junior race and 18.1 off the front.

Osian started the afternoon in the same way he’d started the morning: fastest. Banking on a second run at the longest stage to pull back some of the time lost first time through, the Welshmen were disappointed when the stage was cancelled.

That frustration was channeled into the final long stage of the day, where they were an astonishing 11.7 seconds – more than a second per mile – faster than any of their class rivals, taking the Junior lead back.

“We’ve had a great day today,” said Pryce at the close of play. “It’s been pretty close to perfect and it would have been without that dust issue this morning, but that’s the way it goes. We want more of the same tomorrow. The stages are generally similar, which is fantastic – it’s lovely driving the car down these roads, when we can take our own line and really press on. I’ve loved it, to be honest. The car hasn’t missed a beat and to be out front in the Junior World Rally Championship is a pretty special feeling. Can’t wait for tomorrow morning now!”

SS2: fastest (1st in Junior WRC) moves into the lead of JWRC

SS8: fastest (1st in Junior WRC) Osian back to the front, fastest again

The boys will be heading out east of Mikołajki, towards Olecko tomorrow. And they’d better wrap up… Olecko is the place where Poland’s coldest ever temperature was recorded. It was 1929, February and the mercury dropped to -42 Celsius.

Tomorrow it’s unlikely that record will be beaten as temperatures will make a swing of almost 70 degrees in the opposite direction with 30-plus expected on what’s being billed as a scorching Saturday. In case you’re interested, if a meteorological record for the hottest temperature in Poland is to be broken, we need to hit 40.3 Celsius. We can probably do without that.

As for the roads, there’ll be more of the same: super-quick sandy stages. If anything, they’re a little bit slower than today with more junctions in. And, unlike today when the cars had no service and only a remote tyre fitting zone (which meant Osian and Dale getting their hands dirty), the cars will be back into Mikołajki for lunchtime service which means something to eat and drink while Autosport Technology tends to the car. 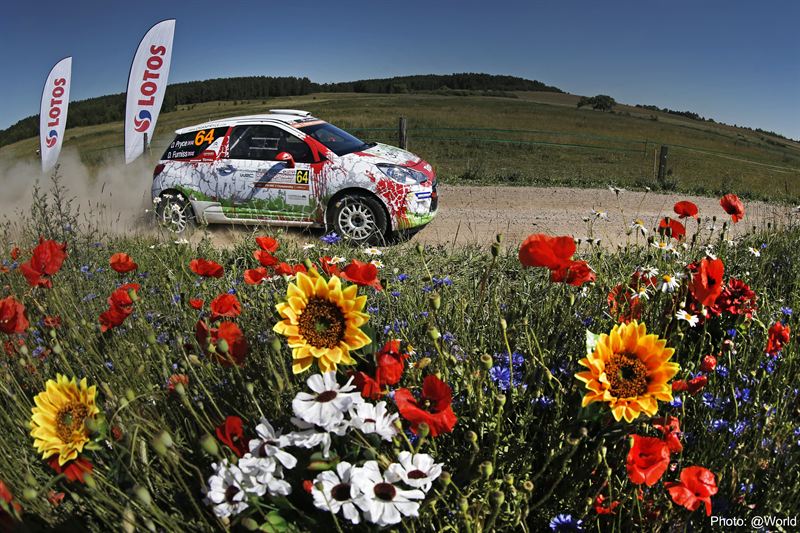