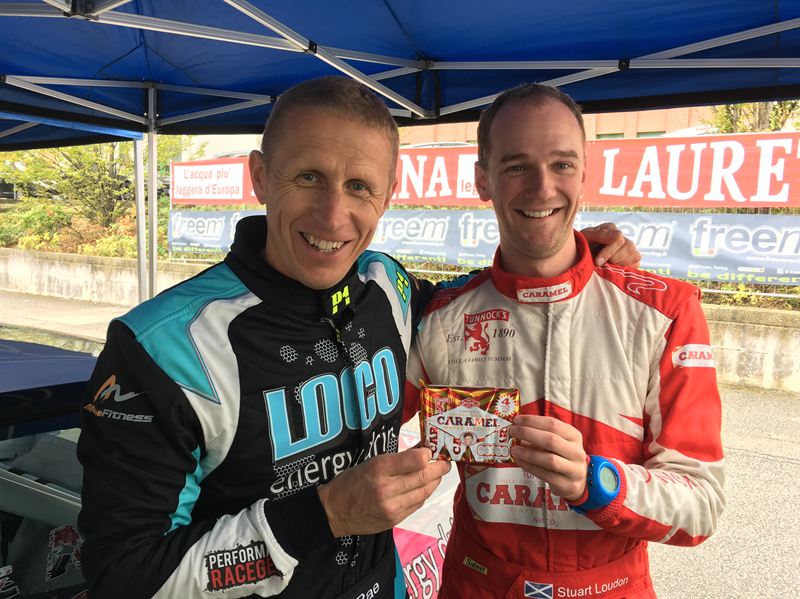 Two down, one to go.

Unfortunately for Stuart, the event ended in another retirement – just six days after his last one on the French island. Despite the engine problem, which ruled the Subaru out of a rally based in the fifth smallest country in the world, Stuart had nothing but praise for the Rallylegend organisers.

Now, though, Stuart’s attention turns to the island of Mull and his attempt to repeat his 2013 win alongside John MacCrone. The pair will use a Ford Fiesta R5 on the inner Hebridean Island this weekend, where they’re certain to face some stiff competition.

After Mull, Stuart will be back to work making the world’s finest biscuits in Uddingston. As well as checking the quality of caramel in the Caramel Wafers, he’s working flat-out to land a seat at Britain’s round of the World Rally Championship, the Dayinsure Wales Rally GB and a full-time co-driving role next season.

“Rallylegend with Alister was the perfect way to get over the disappointment of not finishing Corsica with Mo. That might sound a little strange when you understand that Alister and I actually retired on the second stage… but what an event! I have never seen anything like it in the world. It was absolutely fantastic.

“The only stages Alister and I managed were the first two on Friday night. It was just an incredible feeling to drive through these stages in the dark with camera flashes, flares and fireworks going off all around the place. And the car – the Subaru Legacy – was something else. It was running in 1991 specification with a big restrictor and no anti-lag on the turbo. It was: wait, wait, wait, bang all the power comes. And it came in with one hell of a wallop. It was absolutely amazing, a real privilege and honour to go and do that event in that car with Alister.

“The spectators that were there all seemed so incredibly knowledgeable as well. They were all coming to Alister with books for him to sign and a couple of them actually brought some Tunnock’s World Rally Team postcards for me to sign as well!

“When we had retired, obviously Alister and I relaxed a bit and Luis Moya invited us into the Volkswagen hospitality. I was sat there with Alister, Luis and Markku Alen, then Marcus Gronholm walked in, followed by Timo Salonen and, of course, Hayden [Paddon]. Legends is about right! The whole event was amazing, I loved it and I would be back there in the blink of an eye.

“It’s Autumn, so it must be Mull time… John’s [MacCrone] already doing the recce right now and will have a set of notes ready for me when I get there on Thursday. He and I will then spend the next day going through them and getting everything absolutely perfect.

“Mull’s always been close to my heart and it’s a rally and a place I absolutely love – it was one of the highlights of my career to take the win with John [MacCrone] three years ago. But it’s the same weekend as the Rally of Spain and the World Rally Championship is so much where I want to be. Events like Rallylegend and Mull are fantastic, but working with Abu Dhabi Racing in Corsica has really served to strengthen my desire to realise my dream of a full-time job co-driving in the world championship.

“That’s not to say I won’t enjoy every second of Mull. I will. The rivalries will be as tough as ever, but come the early hours of Sunday morning, we’ll be able to relax and reflect on a weekend of great competition on stunning roads. Here’s to the rain holding off…”

“I flew 9,000 kilometres to drive 14! Obviously it’s really frustrating to retire so early, but what an event! I would love to be back to give Rallylegend another go. I loved the atmosphere and driving something like a Mk II Escort would be perfect – you’d really have the chance to entertain the crowds in that.”

* Tour de Corse was September 29-October 2, Stuart and Mohamed Al-Mutawaa crashed out in their DS 3 R3T on SS5.