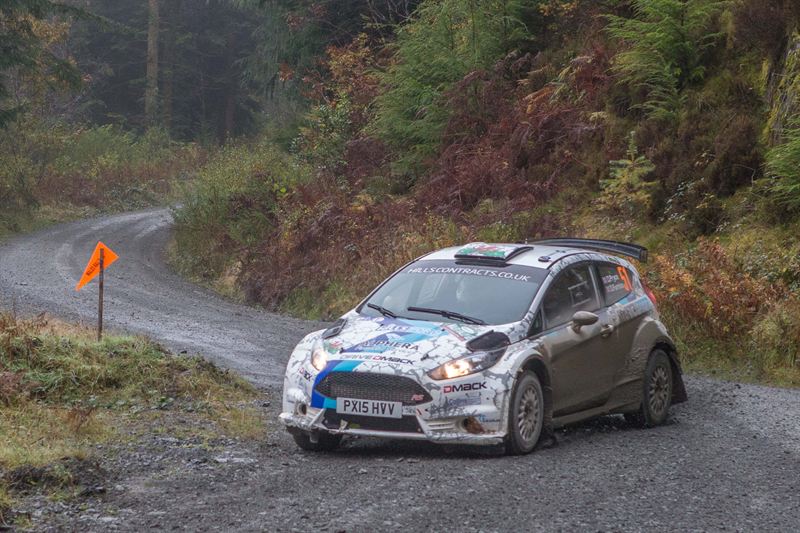 Welsh rally star Osian Pryce set a blistering pace through the second day of Wales Rally GB and ran as fastest Ford Fiesta R5 until a power steering problem slowed his progress on the second loop of stages.

Having spent yesterday playing himself into the Fiesta R5 – a car he hadn’t driven for two years – Osian and co-driver Dale were on sublime form through the infamous Dyfi complex.

Despite predictions of sunshine and dry weather, Wales turned wet and the rain ruined any hope of consistent grip. Not that that bothered Osian. He was flying.

Fastest Fiesta on the second and third stages of the day moved him into a comfortable fifth in WRC2 (behind four Skoda Fabia R5s).

But, it was his pace through the start of the second run at Dyfi which really astonished onlookers.

Then, disaster. Just a few hundred metres down the road, the power-steering failed. Osian stopped the car, reset everything, but the same thing happened.

His Dyfi dream was done. Four minutes would be lost and fifth became sixth in WRC2.

“That second run through Dyfi felt so good,” said Osian. “I’d been a bit messy through there first time, but the second time it was all looking very, very good. A few people told me we were up at the start, but to see the split times and see we were taking more than a second per kilometre out of the top guys in the class – guys who are being linked to full world championship drives next season – is fantastic.

“No doubt, people will talk about this being my home stage, but I’m not bothered about that. Those guys have been in these cars all year, I’ve done a day in our Fiesta – I think that levels the playing field!

“When the power-steering problem came, I was gutted; so disappointed. But these things can happen. The most important thing is the pace we showed today. We struggled for confidence a bit in Pantperthog first up, but after that everything was brilliant.

“Until mid-way through Dyfi second time through, I’ve never driven with a bigger smile on my face. Overall, we’re sixth in WRC2 and second Fiesta. If we can bring home that result tomorrow, I’ll be pleased – that was more than we’d expected before the start. But to be able to point to the times we were doing this morning is a real bonus and it gives me lots of confidence for next season.”

Osian’s day in detail. His times against his WRC2 rivals:

Tomorrow: similar to today with occasional rain and temperatures around 14 degrees