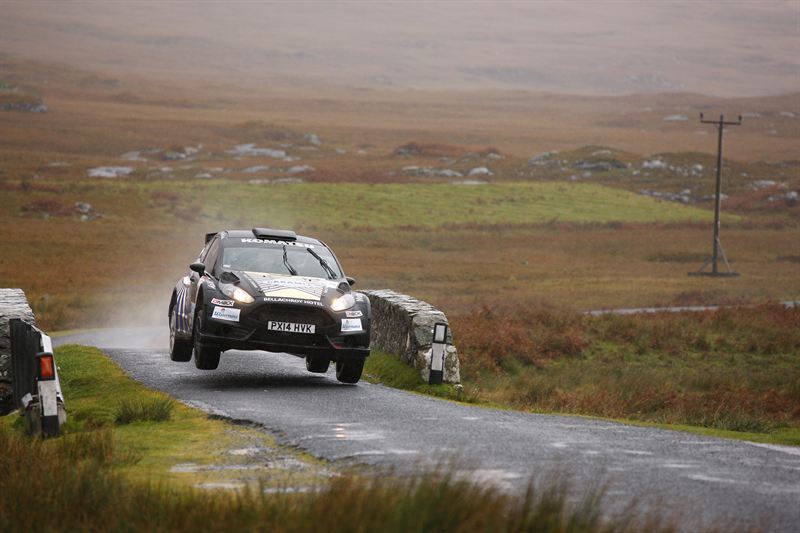 Stuart returned to compete on the Mull Rally for the first time since he and John MacCrone retired a Ford Fiesta R2000 with transmission trouble in 2014. The Scotsmen won the Hebridean island event the year before in a Ford Fiesta S2400.

They scored their second Mull Rally success with a start-to-finish victory this weekend.

This second victory was far from the straightforward affair they’d enjoyed in 2013, when the island was blessed with warm, sunny conditions. Constantly changing weather, a slipping clutch, broken driveshaft and the lack of a map light for the final 15-miler were all problems Stuart and John overcame to clinch the win. Having built an advantage of close to a minute, they took victory by 10 seconds.

The pair’s celebrations were muted at the finish in the early hours of Sunday morning. Emotions were running high in the car, with John competing on this rally 12 months on from the accident in which his co-driver Andy Mort was killed.

“It’s very satisfying to win on Mull again, but there were a lot of mixed emotions this weekend – which is, of course, completely understandable. John drove very, very well through conditions that were typical of the Mull Rally.

“It’s a mark of how much John’s driving has come on that we were able to withstand the pressure Callum [Duffy] put us under. When we won last time, Callum retired early and we spent the whole event on slicks – that one seemed simple by comparison to this weekend.

”We were caught on the wrong tyres on one stage on Friday afternoon, when we tried to run a soft slick. Sitting on the start line, the rain started falling. We were pretty sideways, but we got through in one piece. The big drama for us came in stage 15 when the front-left driveshaft broke. We had to drive eight miles to the finish, where the boys from the Dom Buckley team were waiting for us.

“I have to take my hat off to those boys, they changed the clutch on Friday night and then fitted a new shaft in three minutes in the dark at the side of the road on Saturday night – that was a great effort from them.

“After that, everything was fine until my map light broke at the start of the last stage. I went for the spare, but that didn’t work. With just a couple of minutes to the start, we tried a few options. The torch I carried was too bright, the torch on the phone was too bright – in the end I had to just use the glow from my phone to read the notes. That definitely made the last one pretty interesting for me!

“It was a big relief to get to the end, there was a lot of pressure coming from Callum, but we won by 10 seconds.”