Osian: my toughest day yet

Osian: my toughest day yet

Just when he least expected it, former president Bill Clinton has come up with some words for Welsh rally star Osian Pryce after his tough Rally of Portugal day today.

Have no fear, Bill, Osian’s not for quitting.

Today would, however, have broken lesser men than Osian and his co-driver Dale Furniss. It’s been a shocker. Actually, it’s been way worse than that.

The success of Thursday night and Friday morning faded into a distant memory when the THORUtilities and G&M Pryce-backed Citroën was hit by problem after problem on today’s six stages to the east of the event’s host town of Matosinhos.

The morning was about brake problems, the afternoon a puncture and broken auxiliary belt, which sent the engine temperature sky-high and forced the pair into an early bath.

The silver-lining to this cloudiest of cloudy days was second fastest on the penultimate stage.

“I’m not sure I know where to start,” he said. “But one thing is for sure, neither Dale or I have ever had such a tough day in the sport. It’s been unreal.

“Five miles before the finish of the first stage, the brake pipe burst when we were braking from fifth gear for a second-gear corner, that was… interesting. We drove the rest of that stage with no brakes. The next stage was cancelled, but we’d fitted a new pipe and bled the brakes and we were ready for the third one. Not far in the brakes failed again and we had to do 20 miles with just the handbrake to slow us down.

“We came back to service, got everything fixed and went out for another go in the afternoon. And promptly got a puncture!

“When we got to the end of the middle stage in the afternoon, I actually apologised to Dale for driving so slowly. It felt terrible, just so slow. And we were a couple of seconds off the fastest time! That’s definitely the thing I’ve learned from this event, the art of driving slowly to go quickly.

“I was ready to practice a bit more of that in the long one when we got an engine temperature warning light – a stone had got in and snapped the auxiliary belt. I switched the engine off straight away. Our day was done.

“I think Dale and I have spent more time under the car than we have in it today. None of this is anybody’s fault, it’s all just small things. The belt which ended our day costs £15 – but we’re out because it broke. You can’t prepare for days like this; you can’t blame people for days like this, it’s pure and simple bad luck, nothing more.

“We’ll give it another go tomorrow.”

We started with politics, how about we end with lyrics? They come courtesy of Destiny’s Child and Queen.

Osian’s a survivor and the show must go on tomorrow.

Today in numbers: What went wrong, when…

There’s a 20-miler through Vieira do Minho mid-morning, but it’s the stage that sandwiches that one that really fires the imagination: Fafe. It’s the hero-maker, the stuff of legends and Osian and Dale’s chance to hit that jump and take the same flight path as Markku’s Lancia 037 or a Stig-piloted Quattro. 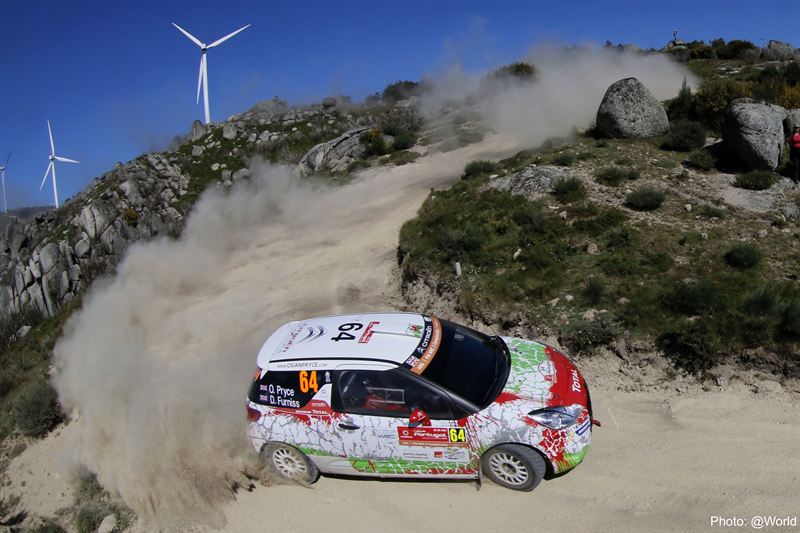