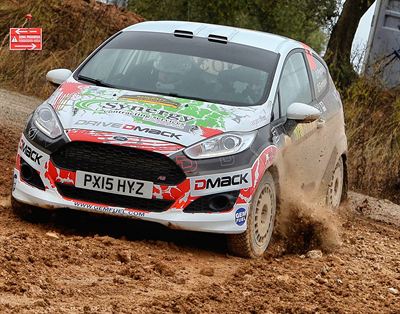 Osian and his co-driver Dale Furniss led the field early on mastering torrential rain and some shockingly difficult conditions. Unfortunately for the Welshmen, they were hit by a misfire aboard their Ford Fiesta R2 on the day’s longest stage.

The problem couldn’t have come at a worse time, with the regulations for the rally not permitting any technical assistance from the M-Sport team running the cars in the Drive DMACK Fiesta Trophy. That forced Osian to drive the whole afternoon with a car significantly down on power compared with his DDFT rivals.

Osian and Dale retired from the final stage at the cost of a 10-minute time penalty. The team will now work on the problem tonight in an effort to trace the misfire.

Coming to Spain off the back of a superb season featuring two wins, a second and a sixth place (following a sublime Rally Finland run) from four rounds meant Osian enjoyed a 14-point lead in DDFT. To retain that place at the top of the table, the Machynlleth driver will have to demonstrate more of that prodigious pace on this weekend’s asphalt stages.

Osian said: “I’m gutted about today. There’s no way around it, no other way of putting it, I’m just so, so disappointed. We were quickest on the first stage this morning, leading and – at that point – looking at an extra three World Rally Championship drives next season. Then disaster.

“We were going up the hill in the Terra Alta stage and I thought I felt the car miss. My worst fears were confirmed a couple of corners later when the misfire really started. We pulled over and got under the bonnet to see if we could fix it, but there was nothing we could do.

“If there had been a main service in the middle of the day, the team could have worked on the car for this afternoon, but we were only allowed to fit new tyres at lunchtime – no mechanical work at all. The afternoon was pretty painful, but that’s the way it is.

“This is a mechanical sport and these things can happen sometimes. There’s no point dwelling on what’s happened, Dale and I are already looking forward to the weekend. We’ve got some fantastic stages coming up in the next two days and we’re going out there to attack them and see what we can do.

SS2: fastest (1st in DDFT) perfect start to the day

Tomorrow: sunshine and temperatures in the mid-20s 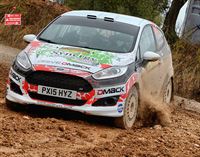