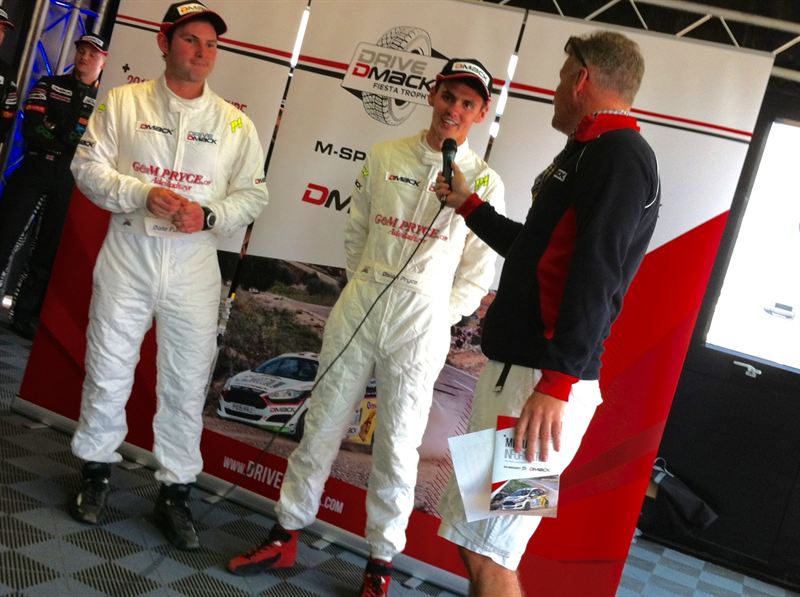 Pryce and his fellow DDFT competitors contested the single test at Lousada, 30 miles inland from the rally’s base near Porto, this evening. The real action starts tomorrow morning, when Osian and co-driver Dale Furniss tackle 80 competitive miles, flat-out over some of Portugal’s fastest gravel roads.

“I’ve been waiting for this moment for a very long time,” said Osian. “We haven’t competed at this level for almost a year.

“Tonight’s stage was really just a loosener for what’s to come tomorrow and over the weekend. We had no problems, just a sensible drive to get us in the groove for the gravel.

“This really is the start of something special for me. Just being here in Portugal among the world’s best rally drivers is incredible. But, just as Sebastien Ogier’s got a job to do at the front of the field, so Dale and I have a job to do in our category: we’re here to challenge for victory.

“This is going to be a tough event, there’s no doubt about that, but that’s why it’s called the World Rally Championship. This is the pinnacle of world rallying and we’re part of it.

“We’ve had the odd issue on the run up to the start, but now we’re 100 per cent focused on the task in hand. We did a final shakedown test earlier today and that went well. Now, we’re just ready to get on with it…”

Rally legend Ari Vatanen was on hand at today’s official DDFT launch (his son Max is one of Osian’s rivals). The 1981 World Rally Champion was full of useful tips for Osian and Dale, while the Welshmen were full of admiration for the Finn.

“In our world, names don’t really come much bigger than Ari,” said Osian. “He remains one of the world’s most talented and charismatic drivers. It was an honour to have him with us today. He’s a real inspiration when we’re starting out on our world championship road.”

Tomorrow’s action will take Osian and Dale north out of Porto close to the Spanish border, where they will tackle two loops of three stages before heading back to Portugal’s second largest city for two spectator-pleasing runs around the Porto superspecial.

Surfing is big in Portugal. Like BIG! In 2011, Hawaiian Garrett McNamara broke the world record by surfing the first ever 100-foot wave. That was done just south of Porto at a place called Nazare. Osian was hoping to break that record before his first WRC round of the season, but when he and his board arrived at Praia do Norte, there wasn’t a single 105-footer to be found. Typical.

Given the prevalence of 100-footers off the coast of Porto (apart from when Osian’s around), it’s no surprise the world’s first wave farm was installed three miles out to sea here. Three Pelamis Wave Energy Converters were installed near Povoa de Varzim in September 2008. The anticipated peak capacity of 2.25 MW was enough to power 1,500 homes. Or it would have been if a bearing problem hadn’t forced its closure after three months. #wavegoodbye

Fishing and eating fish is enormously popular in Portugal. The average Azorean consumes 76 kilos of fish annually. Average for the rest of the world? Sixteen kilos. Those lovely Portuguese island folk are literally eating their own body weight in fish.

Porto is the only European city with six bridges. One of them, the Maria Pia Bridge, was designed by Gustave Eiffel, just before he switched his attention to Paris’s lack of a tower.

The French connection doesn’t end there. The ‘Frenchy’ is a typical Porto dish. It’s a sandwich with beef, ham and sausage, soaked in a tomato-beer marinade before being covered in cheese and surrounded by chips. Osian and Dale have not been tempted by a ‘Frenchy’.

About Rally of Portugal