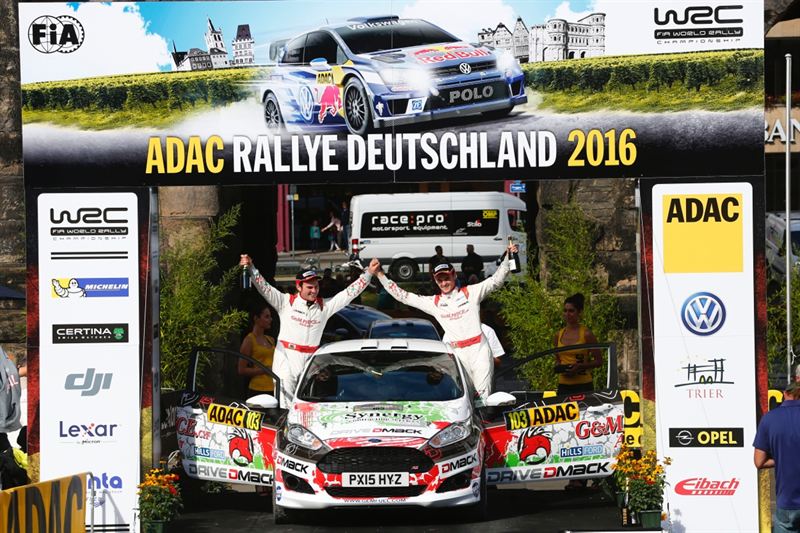 Despite never having competed – or even visited Germany before – the Machynlleth driver dominated the Drive DMACK Fiesta Trophy element of the event. Fastest on the opening stage, Osian and co-driver Dale Furniss were headed for three intense and unbelievably challenging days of sport in the vineyards, lanes and military roads around Trier.

The Welsh pair celebrate their second victory of the season, having won the opening round in Portugal as well.

Osian said: “Brilliant, this is just brilliant. I’m so happy. This was the perfect event for us. Never having been here before, I didn’t really know what to expect. I’d watched as much coverage on television as I could, but the plan was to come here and drive our own rally.

“It felt good on the first stage, even in the unpredictable conditions I had complete faith in the tyres – the DMACKs were superb on such slippery roads. And everything just clicked. I felt comfortable, Dale was absolutely perfect on the notes and we were able to take time out of the other guys.

“The key to this week was staying out of trouble. In places the road was completely covered in mud, it was just like ice. Dale and I had worked really hard in the recce to identify the areas we felt could be affected by a weather change before the start and this helped us. Once we’d got the lead, Saturday was about managing that lead.

“I have to say, I’d heard a lot about the infamous Panzerplatte stage, but I absolutely loved it – what a challenge and what a stretch of road! That’s how I feel about the whole thing, to be honest. It’s been a great, great rally.

“What I’m really pleased about as well is the speed we’ve maintained from Finland. We made a small mistake on the second day in Finland last month and that cost us the win. As it was, we were fastest on day one and day three there, but without that mistake we could have been sitting on three wins and a second. But I’m not going to dwell on that, I’m over the moon with this result!”

Osian will now head to Spain for the final round of the DDFT and a repeat result will be enough to win him two more prize drives in a works Ford Fiesta R5 in next year’s WRC2 series. His Portuguese win allied to a second place in Poland earlier this season was enough to bag him two drives with the world champion M-Sport squad already.

“In terms of the championship,” Osian added, “the job’s only half done. We’ve got to go to Spain and do the same thing again. Obviously having the win takes a little bit of the pressure off, but we’ve never competed in Catalunya, so Dale and I will be busy doing our homework in front of the telly again before then!”

SS17: stage cancelled – too many spectators

Today: overcast with rain at times