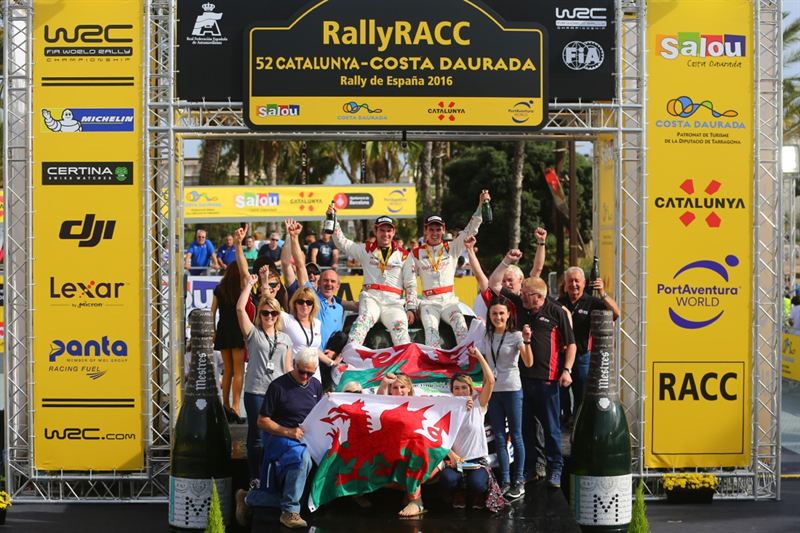 The Rally of Spain finished after a nail-biting climax in Salou this afternoon (Sunday).

Pryce and Finland’s Max Vatanen went into today’s final four stages dead level on points, but it was Pryce who emerged ahead of the son of 1981 World Rally Champion Ari Vatanen on points.

Pryce’s hopes of victory on the rally itself were lost on the opening day, when a misfire slowed his Ford Fiesta R2 dramatically. Despite that problem, Osian and co-driver Dale Furniss kept their composure, absorbed enormous pressure and put together a fantastic recovery drive to bounce back from 10thto fifth, albeit with the help of some retirements from other crews.

None of that matters to Osian, however, who is currently residing on top of the world.

“It hasn’t sunk in yet,” Osian said, “and I don’t think it will sink in for quite a while! This sport can be so cruel at times, I was on the floor on Friday – I couldn’t believe we’d come so close and it looked like we were going to lose it. But we picked ourselves up and got on with it and now look: we’re champions!

“I’m just delighted with this championship, it even sounds strange to be saying things like that! People really recognise this as the place where up-and-coming talent comes from, so to take the title across five rallies which are so different in nature is absolutely brilliant!

“I have to say, we were quite steady through the final stage. When we got to the final roundabout, the one where you’re supposed to do a big slide around there – we were so steady. Getting across the finish line was the biggest moment of my career. It’s unbelievable. And what’s better is that everybody was there, the whole family – everybody who has believed in me for so long and helped make this happen. I hope this title goes someway to repaying them!”

Malcolm Wilson OBE M-Sport managing director said: “We’ve been very impressed with Osian and Dale this year. They’ve shown plenty of speed and consistency to win rounds outright and now take the title in what’s been another incredibly competitive season in the Fiestas. I’m very much looking forward to seeing what they can do next season.”

Dick Cormack DMACK managing director said: “This has been such a close season in DDFT – and an absolute thriller of a final round. Congratulations to Osian and Dale, they’ve been right at the sharp end of the pace all year and they deserve this title.”