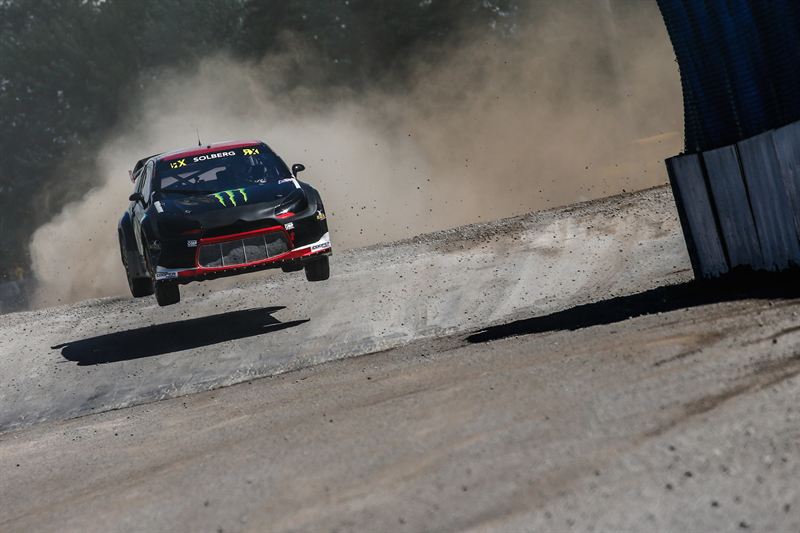 Petter Solberg leads the World Rallycross Championship again following a dominant display at World RX of Canada – but the watching world held its breath after the triple FIA World Champion was involved in a crash after the finish of the final race.

Solberg crossed the finish line in fifth place and was slowing down when he was hit from behind by Anton Marklund’s Volkswagen. The reigning World RX champion was taken to hospital close to the Trois-Rivieres track, where he was discharged later this evening (Sunday).

Comfortably fastest throughout free practice, qualifying and the semi-final, Solberg’s victory march was only halted in the final, where he played it safe in a first corner tussle and ended the race fifth. Back in the lead of the championship, it was seconds later that Petter’s weekend really turned bad…

Petter said: “That didn’t go to plan in the final for sure. The data shows that Marklund hit me from behind doing around 140kph and I was travelling at about 35kph. It was all after the finish line, I could see [race winner, Timmy] Hansen celebrating so I slowed down, and then there was just a huge impact from behind.

“The team said that he [Marklund] lost all braking in the car. To be honest – on my feeling alone – this was probably the worst accident of my career, much worse than my crash at Rally Germany in 2004. It took me at least five minutes to get the feeling back in my legs and feel strong enough to get out of the car. I went to get checked out at the hospital and I’m okay, but very, very sore.

“The car did not fare quite so well. It’s in a massively bad condition now and my team has a huge job to get it ready for France. It’s such a shame, we scored maximum points in three of the qualification races, and I won the semi-final, but now we have to work like hell to make the start in Loheac.

“After everything that happened, I’m just looking forward to heading back home now and supporting my son Oliver who is fighting for the European Championship title in Crosskarts next weekend.”

Q1 – 1st  (position in the standings after qualifying races)

Mr Hollywood gets the party started in the only way he knows how: fastest in free practice. Petter carried that sensational form into the weekend’s first competition. He led from start-to-finish and was two-tenths of a second up on everybody. Want to be even more impressed? He did all that – and set a new track record (four laps, 3m24.209s) – with a broken fifth gear.

Straight into lead from pole and, once again, controlled the race. Timur Timerzyanov was the only driver able to keep pace with the reigning champion, but still Petter was a massive – in RX terms – 1.3 seconds ahead at the finish line. Oh, and it was another track record for Solberg (4 laps, 3m22.116s).

Another great start… but this time Petter was hit hard and pushed out of the first corner by Timerzyanov. Solberg just about scrabbled around and luckily nothing broke on Petter’s car. Timerzyanov was let off with a warning while Solberg stayed in the overall lead.

Revenge! Petter was up against Timerzyanov once again, but this time managed to come through with a clean win. Another controlled performance and another heat win. And guess what? Another track record (4 laps, 3m20.947s). Honestly, Petter, what’s the point in setting a new record, if you’re only going to break it again? Full score (16 FIA World RX Championship points) for winning the intermediate standings.

More domination. Petter takes a comfortable win with an ultra-dominant display to place the PSRX Supercar on the front row for the final.

Fifth and the championship lead. All good and heading home for a polish in time for Loheac. Then, everything changes.

Next time out World RX of France (September 02-04)

It’s the big one. Or at least another one of the big ones… France, Loheac in particular, is absolutely crazy for rallycross. And this year, you might imagine, the French folk will be even crazier about rallycross than ever. Any idea why? That’s right, Petter’s out for revenge at missing out on back-to-back Brittany success last season. Alternatively, it might have something to do with a local called Loeb, Sebastien Loeb.