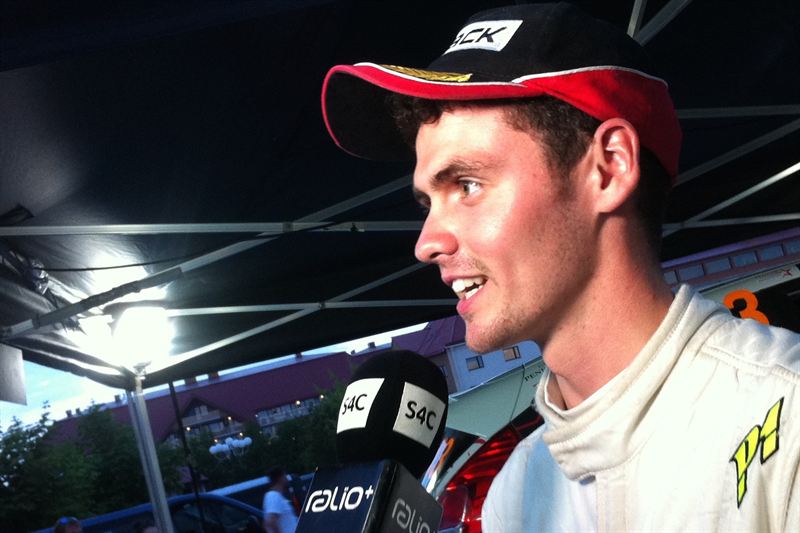 And so it has begun. Osian Pryce’s Neste Rally Finland dream became a reality this evening, when he drove the opening stage of an event he’s been thinking about since he was a boy.

Second quickest – missing the stage win by just six tenths of a second – it’s tomorrow when the real work begins.

For drivers the world over, rallies don’t come any bigger, faster or higher (car from road-wise) than this week’s round of the FIA World Rally Championship. Rally Finland is the king-maker. Not that you’d have thought so if you’d seen tonight’s opener around the streets of Jyväskylä; the mile and a bit long asphalt dash means nothing and has very little in comparison with the gravel roads lying in wait – but still Osian and co-driver Dale Furniss loved it.

The Welshmen, who secured the first part of the Drive DMACK Fiesta Trophy prize (two paid drives in next year’s World Rally Championship) at Rally Poland earlier this month, tested their Ford Fiesta R2T at this morning’s shakedown stage before preparing themselves for SS1 this evening.

“Shakedown was good,” said Osian. “It was important to get back in the car and get a few miles on the loose under our belt again. We haven’t done anything since Poland and even though it’s only three weeks since that event, it feels like a really long time out of the car.

“Even the street stage tonight is famous. When you watch YouTube footage of Rally Finland and the 1000 Lakes going back to the Eighties and Nineties, you see this stage being driven by Hannu Mikkola in an Audi Quattro, Tommi Mäkinen in a Mitsubishi and Colin [McRae] in a Subaru of some sort. Just this mile-long stage is a very, very big deal – there’s a story on every corner of this event. It’s fantastic to be here and to be competing.

“But the focus is tomorrow and the first stage proper: Mökkiperä. I’ve dreamed of this moment for a long time, but it’s a reality now and with that reality comes expectation – I want to win DDFT and I want the next two prize drives that are up for grabs on Sunday afternoon.”

If you take a taxi in Finland and the cabbie’s playing Summer Holiday by Cliff Richard, he has to pay Richard royalties. It’s the same if Highway to Hell comes on, he owes AC/DC. In fact, while you’re onboard, it’s the same with any music: if he plays, he pays royalties. Once you’re gone, he listens for free. Most cab rides in Finland are very quiet.

Don’t butt in! Finnish culture frowns on anybody interrupting on a conversation.

But do get naked… in the sauna. It’s nothing but the birthday suit when you step inside the hottest room in town.

And don’t try to use a public telephone – there aren’t any. But… there are more than five million mobile phones in Finland, not bad for a country with a population of 5.4m!

Finland hosts the annual Mobile Phone Throwing World Championship. Seriously, slinging your cell has been a national sport since 2000. The current record is held by Dries Feremans, who hurled his handheld 110.42 metres in 2014. The 2017 World Championship event, held in Savonlinna next March, is bidding for title of Winter Sport of 2017.